‘Church for which the Border really does not exist, as no border exists in the mind of God’ 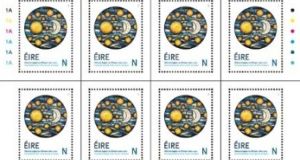 The stamp are available at anpost.com/shop

A stamp marking 150th years of the Disestablishment of the Church of Ireland on January 1st, 1871 has been issued.

The €1 stamp, by Dublin’s Vermillion Design, features an image of the sun, moon and stars stained-glass panel in Cork’s Cathedral of St Fin Barre.

Disestablishment was the first major break in relationships within these islands following the Act of Union in 1800 which united the Church of Ireland with British State’s Church, the Church of England, and brought government in Ireland under London control.

Welcoming the new stamp, Archbishop of Dublin Michael Jackson said Disestablishment meant, that “tied to neither the Church of England nor the State, it has enabled the Church to find afresh its independence and mission.”

At a November 2019 service in Dublin’s St Patrick’s Cathedral to mark Disestablishment, Archbishop of Canterbury Justin Welby described the Church of Ireland as “a bridge church. It bridges the two parts of this island.”

It had “made a wonderful bridge with the Methodists. It has bridged across the gaps and divides in the Anglican Communion. It is a church of reconciliation and courage. Its history is one of regeneration, of resilience, and it has led the way in many respects, including the ordination of women.”

It was also a “church for which the Border really does not exist, as no border exists in the mind of God. Today the Church of Ireland is challenged to be the prophetic voice of God in a time when the side-effects of Brexit will produce unforeseeable consequences.”

The stamp and a special First Day Cover envelope are available at anpost.com/shop (with free delivery) for 12 months, at the GPO Dublin and main Post Offices.

Disestablishment also gave rise to one of the longest words in English - antidisestablishmentarianism, describing the movement opposing it.