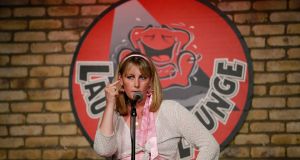 Emma Mhic Mhathúna on stage at the Laughter Lounge in Dublin: Photograph: Nick Bradshaw for The Irish Times

Emma Mhic Mhathúna, who has terminal cancer after incorrect smear results, has said criticism of Taoiseach Leo Varadkar for his handling of the scandal is unfair.

The Kerry woman and her five children sued the HSE and US laboratory Quest Diagnostics Inc over incorrect smear test results and she settled her case last month after being awarded €7.5 million damages by the High Court.

Ms Mhic Mhathúna was speaking ahead of her first stand-up comedy gig in aid of a garden of remembrance for the victims and the families of cervical cancer in Dublin on Friday night.

“I have mentally closed the chapter on the smear scandal and now I want to bring some love and laughter into people’s lives and hopefully put a smile on people’s faces,” she said.

“My set is light-hearted – I didn’t want to get up and bash people. It’s all good clean jokes. I’ll be having a go at the labs in my set but not any politicians so they can rest easy,” she said.

Ms Mhic Mhathúna defended Mr Varadkar’s handling of the controversy. Mr Varadkar said he should have been clearer when he promised in May that no women involved in the scandal would have to go to court.

“People need to remember that the Taoiseach is the Taoiseach and he needs to be respected at all times when it comes to external affairs. We need to get behind him and not direct our anger at him. I’m disappointed with the backlash he has received, particularly in relation to the Ruth Morrissey case,” she said.

Ms Morrissey had to take her legal action over the alleged misreading of her cervical smear tests to court last week.

“When Mr Varadkar said he didn’t want women to go through the courts, he meant that in his heart. People need to get off his back and understand the pressure he is under,” she said.

Liability was admitted in her case by the HSE and Quest Diagnostics.

Letters of apology from the HSE and Quest were also be sent to Ms Mhic Mhathúna.

The admission of liability by the HSE related to failing to disclose the findings of cervical cancer. Quest Diagnostics admitted misreading her two cervical smear slides in 2010 and 2013.