Life as a postmaster: ‘The money was terrible but I really loved it’ 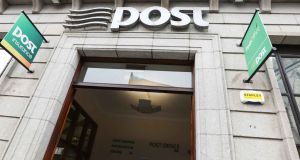 When Jennifer Allen was made postmaster in Ballylongford she couldn’t imagine doing anything else ever again.

Years before her promotion to what was still a central role in the Co Kerry village in 2005, she had worked as a secretary in Dublin.

Walking down the capital’s main thoroughfare O’Connell Street, she would always stop outside the GPO.

“I would look in the door, and I would think that is the most gorgeous job in the world,” she says.

“I always thought I’d love a job in the post office. And it turned out to be every bit as nice as I thought it would be. I loved it.

“The money was terrible but I really loved it – loved the people, loved the work.”

Allen (46) is one of about 160 postmasters around the country who have applied for a voluntary retirement package, which will include the closure of their mainly rural post offices.

Ballylongford has a population of 418. Up until the last 10 years its post office was at the centre of daily life. Allen says she found a listing for a penny post office in Ballylongford for 1824.

“The last few years I have just been trying to survive, and raise a family,” says the mother of two (aged 10 and eight).

“It is an opportunity for me to start afresh. I wasn’t expecting it, I thought I would just be eventually squeezed out and my situation would be much more dire.”

Amid the economic crash, An Post also started to suffer and looked to cut “every which way they could”.

“I held a public meeting here in Ballylongford about it,” she recalls.

“One prominent Fine Gael politician took out a full page advert in the local Advertiser for north Kerry, saying that there was no threat to our future. I’d like to hear what he has to say now.”

“It is not a popular thing to say, but that is the fact. If we got the support, we would still be here,” she says.