NI Executive unable to agree whether to extend four-week lockdown

Ministers scheduled to meet again on Tuesday for further discussions 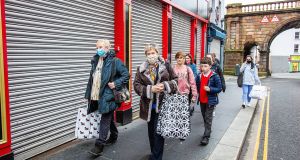 Pedestrians pass shuttered shops in Derry. The Northern Executive is to meet again on Tuesday to discuss whether to extend the current four-week lockdown by another two weeks. Photograph: Bloomberg

The Northern Executive after two meetings on Monday was unable to agree on whether to extend the current four-week lockdown that is due to end on Friday.

The Executive met in on Monday morning and then again on Monday night to discuss whether to end the lockdown on Friday or to prolong it by another two weeks - but with some relaxations.

On a day when a further ten Covid-19 deaths and 471 new cases were recorded in Northern Ireland Executive Ministers were presented with a paper from the Department of Health recommending an extension of the lockdown by two weeks.

One proposal being considered was that there would be some limited reopening of the hospitality sector which was shut down on October 16th.

This could allow cafes and restaurants to reopen but would ban them from selling alcohol for two additional weeks.

The Executive met for more than an hour on Monday morning and again on Monday night to see if they could agree on a way forward. They requested more scientific information to assist them in reaching a decision.

In the end they could not reach agreement. Ministers are scheduled to meet again on Tuesday for further discussions.

With ten more deaths reported on Monday the North’s coronavirus death toll now stands at 791. The number of confirmed cases has risen to 43,388 with 3,921 cases occurring in the past seven days.

There are now 426 patients receiving Covid treatment in Northern Ireland hospitals with 55 of them in intensive care units and 43 on ventilators. The overall hospital bed occupancy figure is at 94 per cent.

The overall 7-day Covid figure for Northern Ireland is 208 cases per 100,000 of population.

The highest incidences continues to be in Mid Ulster with 283 cases per 100,000 followed by Derry and Strabane with 260 cases, Causeway Coast and Glens with 235 cases, and Belfast with 222 cases.

Meanwhile, health Minister Robin Swann cautioned the public not to “let down their guard” despite news that Pfizer and BioNTech have developed a vaccine that is reportedly 90 per cent effective against Covid-19.

“It will likely be well into 2021 before a vaccine is generally available to the population - not least because mass global vaccination is a huge logistical challenge,” he said.

“We have been waiting a long time for positive news. While there are very important regulatory and safety assurance hurdles to still be cleared, today represents a step forward,” he said.

“While there are no guarantees, there is a possibility that vaccination of at risk sections of our community could begin by the end of this year,” added Mr Swann.

The DUP health spokeswoman Pam Cameron called on the Irish Government to ban travel from Denmark in light of the recent outbreak of coronavirus in mink farms there.

“The UK has rightly taken the tough decision to temporarily close our borders to Denmark. Health authorities there have reported widespread outbreaks of coronavirus in mink farms. There is also evidence of the disease then spreading to some local communities,” said Ms Cameron.

“It is important and necessary that we take steps to protect our population from any potential threat from this new strain of Covid-19. The onus now is on the Republic of Ireland’s Government to also take this precautionary and responsible step,” she added.

Mr Swann has raised the matter with his counterpart Stephen Donnelly in the Republic.