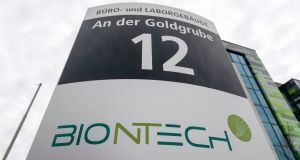 BioNTech plans to produce 50 million doses of the new vaccine before the end of the year and up to 1.3 billion in 2021. Photograph: Ronald Wittek/EPA

German immunotherapy company BioNTech is based in Mainz with the postal address “An der Goldgrube”, which translates variously as “On the Goldmine”, “bonanza” or “money-spinner”.

The Covid-19 vaccine it announced with Pfizer on Monday has the potential to be all three. After a 10-month development called “Project Lightspeed”, the German company is sitting on an innovative therapy that – on this pandemic-hit planet – is worth far more than gold.

And Mainz, a city best-known for Johannes Gutenberg’s revolutionary printing press in the 15th century, may now have produced a 21st-century revolutionary vaccine.

BioNTech was founded in Mainz, 40 minutes west of Frankfurt, in 2008. It describes itself as a “next-generation immunotherapy” company, producing therapies – in particular for cancer patients – that are tailored to their tumours.

It employs more than 1,400 people and, with its focus on oncology and next-generation mRNA vaccines, has experience treating 17 different tumour types in the past 12 years.

The company’s co-founder and chief executive Prof Ugur Sahin called the news a “victory for innovation, science and a global collaborative effort”.

BioNTech launched its search for a vaccine in January and, in April, announced a partnership with US pharma giant Pfizer. While the Germans would develop the vaccine, the New York-based company bought an equity stake worth €113 million and brought to the project its vaccine experience and distribution network.

In September, BioNTech acquired from Swiss rival Novartis a German production site for its new vaccine. Now it plans to produce 50 million doses of the new vaccine before the end of the year and up to 1.3 billion in 2021.

BioNTech’s stock jumped around 15 per cent on the news while Pfizer saw its stock spike 10 per cent in early New York trading.

The news caught many Germans – including politicians and medical professionals – off-guard, but surprise soon turned to delight at just how effective the vaccine appears to be.

“These are great and promising data,” said Prof Dr Gerd Fätkenheuer head of infectiology at the University of Cologne. “I think this will have a decisive effect on how we deal with the pandemic.”

Ahead of its licence application next week, other voices urged restraint. Prof Frank Ulrich Montgomery, president of the World Doctors’ Association, based in Germany, described the vaccine as a “huge leap forward” but noted that the research and results had yet to be peer-reviewed.