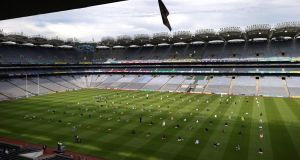 Two hundred Muslims attended a historic prayer service on the pitch of Croke Park on Friday to mark the Festival of Eid al-Adha.

Croke Park has hosted several religious festivals in recent years but it is the first time a Muslim Prayer Service has been held there.

Social distancing regulations related to Covid-19 made it impossible to hold a large gathering in a mosque, leading to Shaykh Umar al-Qadri asking Croke Park management for assistance.

He said he got the idea after seeing Ikea in Germany allowing Muslims to use one of their car parks.

“I thought Ireland can do even better so I approached Croke Park, the most iconic, Irish, symbolic venue you could think of,” he said. “They didn’t hesitate.”

The event was attended by Archbishop Diarmuid Martin and other faith leaders, along with Minister for Children, Disability, Equality and Integration Roderic O’Gorman.

Shaykh Al-Qadri asked for blessings for health care professions, for Allah to give people strength to follow the health regulations and for the Government to show strength in its leadership during the pandemic.

President Michael D Higgins, who was unable to attend, sent his best wishes. “The celebration in such an iconic Irish venue of this significant holiday in the Islamic calendar is an important moment in Ireland’s narrative,” he said in a statement. “It reminds us of the richly diverse community we have become and the enormous contribution that you, our new communities, have made and continue to make to Ireland.”

He thanked the Muslim community for their “valuable contribution to a shared society”.

Most Reverend Michael Jackson of the Church of Ireland said the “silence” created by the pandemic and the lockdown has been filled with the sounds of “neighbourliness”.

“The unknown person next door became a neighbour. Care quickly began to go both ways. While many of us had been taught from our youth that it is more blessed to give than to receive, we all learned the positive lesson of humility and of Otherness to the effect that it is just as blessed to receive as to give.”

Rabbi Zalman Lent said that, at a time of so much anti-Muslim and anti-Semitic feeling, “it is special we can all sit here together…as brothers”.