Coronavirus: Africa to hit a million cases amid testing concerns 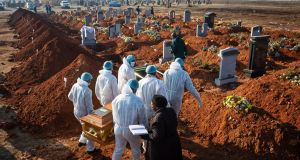 Family members wearing PPE suits carry the remains of an elderly relative who died from Covid-19 at a graveyard in Johannesburg, South Africa. Photograph: EPA/Kim Ludbrook

Confirmed coronavirus cases on the African continent are expected to hit one million this week, with experts raising concerns about the lack of testing capacity in many countries, warning that the spread of Covid-19 may be much greater than is known.

The continent was slow to experience a surge in cases, with 100,000 reached in late May.

South Africa’s first case, on March 5th, was a man who had returned from Italy. It now has more than 521,300 cases – more than half of the continent’s total.

Ghana and Algeria have more than 30,000 confirmed cases, while Kenya and Morocco have topped 20,000.

More than 650,000 of those diagnosed across Africa have already recovered, while at least 21,050 people have died.

Africa is the world’s youngest continent, with roughly 60 per cent of its population under the age of 25, something that medics say may make the disease less deadly.

In some countries experts are worried that big outbreaks may be ongoing but unreported. Tanzania, an East African country of roughly 60 million people, has not reported any cases in three months. President John Magufuli says the disease is “absolutely finished”, but opposition accuse him of a cover-up.

Madagascar, an island nation off Africa’s southeast coast, now has more than 11,200 cases. Its president, Andry Rajoelina, was widely criticised after he began promoting what he said was a herbal cure for coronavirus, named Covid Organics. The concoction was exported across Africa, as well as being distributed to Malagasys. The country has since gone into lockdown again after seeing another surge in cases.

Caroline Tatua, who works with the International Rescue Committee in Kenya, told The Irish Times she is worried about the low testing capacity in many African countries.

“We haven’t reached the level of testing that gives us an indication of what we are dealing with,” she said.

Some of the most concerning countries are those with a low number of tests per million people like Niger, South Sudan, Mali and Burundi, or the countries with the highest test positivity rate like Somalia, Central African Republic and the Ivory Coast.

“It is really important to understand...the burden of disease across the countries and ensure that an appropriate response is in place even as restrictions are lifted.”

Many African countries have also been devastated by other crises, like wars or natural disasters, and the coronavirus pandemic may be low on the list of priorities for civilians and government alike.

“We do still have a window of opportunity,” said Ms Tatua, “because for this to be eradicated we need to be able to tackle the pandemic everywhere, in every corner.”