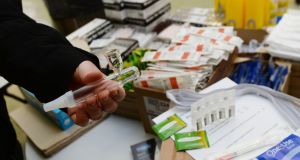 Derek (35) had been “stable, off heroin” for the past five months and was to start a residential detoxification programme next week.

“I’d been working so hard to stay stable, stay clean,” he says.

He had stayed away from friends “who drink” and was taking 30ml of methadone a day through a Health Service Executive programme.

Two weeks ago, however, he was told his detox place had been cancelled due the coronavirus outbreak.

“I’m back using heroin. Everything that was helping me is gone. The [Narcotics Anonymous] meetings are all cancelled. The project I was going to is closed . . . It was the structure: having to get up in the morning and be somewhere distracts your mind from the addiction,” he says.

“When I was told I wasn’t getting into the treatment it was a kick. It was like, ‘What’s the point?’.”

Asked what he thinks will happen to him if the closure of services for people addicted to illicit drugs continues for long, he sighs: “I’ll probably end up dead somewhere.”

Derek speaks for many drug users and recovering addicts cut off from key supports. His situation exemplifies what many working in services fear, says Laurence Moloney, manager of the Merchants Quay Ireland (MQI) needle exchange in Dublin. The worry is that there will be relapses and perhaps deaths among an “already very vulnerable demographic” if the shutdown drags on.

At Sunday morning’s needle exchange, one man who comes to get injecting equipment tells staff he has not used drugs since 2011.

MQI, the State’s largest voluntary drug treatment centre, has had to close its premises and halt many core services including counselling, medical assessments, safe-injecting workshops and family supports.

It now offers take-away meals instead of sit-down dinners. Its needle exchange, providing clean injecting and smoking equipment, has been reduced to a take-away service operated from a hatch. Staff stand two metres back, asking what the client needs and how they are, before handing them clean equipment in a paper bag.

“We are still doing in the region of 100 to 120 needle-exchange interventions every day,” says Moloney. “So that’s not indicating any change in scoring their drugs, heroin or crack.

“But they can’t come in. It is a huge loss. There are needs we can’t meet at the moment, but the basic needs – safe, clean equipment – are being met.”

This means clients are missing out on anything from “chats” to a full assessment of their needs – social, housing, emotional as well as drug-using equipment.

Anthony (47), from Oliver Bond Street, also had his treatment cancelled due to Covid-19 closures. “I was supposed to go into the Lantern Centre last Thursday. It was cancelled. And Keltoi has shut as well to facilitate segregation.”

Gary Broderick, director of the Saol project, which works with up to 150 women in addiction in north inner-city Dublin, is “absolutely worried” about women relapsing or “going backwards” during the crisis.

“A lot of what we do is about building relationships, trust, connectedness, a safe place. The regularity of coming here is gone,” he says. “The only way we can stay connected at the moment is by phone or Zoom. But some are in hostels with no wifi and phone credit is a huge issue. We have had to buy mobile credit for some and last week we were paying for electricity for a client.”

Anna Quigley, co-ordinator of the CityWide drug campaign, says maintaining connection is creating costs for projects that they would not have planned for.

“There will have to be an appreciation by Government that projects will spend this money now because it’s an emergency, and they will have to be funded after all this. People will relapse and recoveries will go back, and people will need additional supports after this emergency.”

A HSE spokeswoman said addiction services remained open but were prioritising opioid substitution (methadone and physeptone) treatment to more than 10,500 people across the country.

“The national addiction advisory governance group continues to meet on a biweekly basis to address any issues that may arise. We understand this is a risk time for individuals in terms of overdose and are advising all services to prescribe Naloxone [an antidote to opiates in event of overdose] to the cohort of people opioid dependent.”