Dealmaking grinds to a halt on coronavirus impact

Activity falls to same level as nadir of financial crash 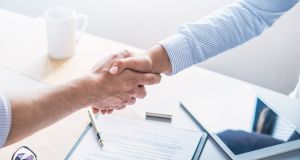 A multiyear boom in mergers and acquisitions activity came to a halt by the end of March, as the fallout from the coronavirus pandemic ravaged corporate share prices and redirected the focus of executives towards saving their own companies instead of trying to buy others.

Deal activity last week totalled just $12.5 billion (€11.4 billion), the lowest weekly total since the nadir of the financial crisis in April 2009. The overall value of deals in the first quarter fell 28 per cent from a year ago to $698 billionn, the weakest year-opening period since 2016.

The quarterly decline was led by a sudden reduction in US activity. The number of total transactions and the number of transactions greater than $10bn also fell sharply globally, according to data from Refinitiv.

Leon Kalvaria, chairman of the institutional clients group at Citigroup, said he expected M&A would remain at a near standstill in the short term as most companies considering an acquisition had pressed the pause button.

“Everyone is thinking about their employees and customers first,” said Mr Kalvaria. “Few companies will be doing cash deals in this environment and private equity players will focus more on managing their portfolio companies before starting to do deals.”

The pace of dealmaking among American companies had already begun to slow before the pandemic forced officials to shut down the hardest-hit areas of the US including New York City, the centre of the US financial industry.

Morgan Stanley’s $13bn all-stock takeover of brokerage ETrade and Thermo Fisher’s $11.5bn acquisition of Dutch diagnostics group Qiagen were among the few megadeals in the first quarter. Overall, US M&A activity dropped 51 per cent to $253bn for the quarter compared with the same period last year.

European volumes actually rose 51 per cent to $232bn in the period. That was due to a pick-up in private equity acquisitions and the all-stock takeover of insurance broker Willis Towers Watson by its rival Aon. But most of the European activity took place before the pandemic shifted focus among corporations.

“In the first week of a crisis, everyone looks at their balance sheet and says everything looks OK. And then as time goes on, they look at the cash burn rate amid declining revenue and become focused on their liquidity, credit profile and ratings,” said Dietrich Becker, Perella Weinberg Partners’ head of European advisory.

“Activist defence and general corporate defence remain a theme that our clients are focused on given the sharp share price falls. I suspect there will be some good, old-fashioned defensive mergers as companies will need to accelerate consolidation.”

The European data was skewed by the inclusion of the transfer of a majority stake in the Russian bank Sberbank from the country’s central bank to a state-controlled fund, a $40bn deal which Refinitiv classified as the biggest so far this year.

The pandemic, which started in China and later made its way to Europe and the Americas, hit cross-border transactions in the quarter, which fell 17 per cent from a year ago to $204bn. Cross-border dealmaking may suffer further as governments from the EU to Australia expressed a desire to protect domestic companies from foreign takeovers following market disruptions.

Several dealmakers stressed that the current crisis was different from the one in 2008 when the financial system was at the heart of the problem and said they expected M&A activity would bounce back once the pandemic was over.

“M&A activity has slowed down as clients are trying to assess where the market is moving, the impact on individual sectors and businesses, and are waiting for valuations to stabilise, but dialogues remain robust,” said Ros L’Esperance, global co-head of banking at UBS.

“Certainly there will be a delay in activity but once things reset they will probably bounce back and accelerate much faster than it did after the financial crisis in certain sectors.” – Copyright The Financial Times Limited 2020