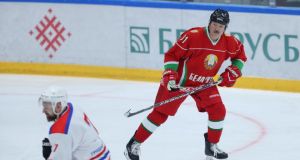 As most of the world turns to social distancing, face masks and hand sanitiser to slow the spread of coronavirus, Belarusians are being told that farming, sport, the sauna and a few shots of vodka are better ways to ward off the disease.

Alexander Lukashenko, the authoritarian leader of Belarus, has decreed that the pandemic will not disfigure life in the country he has run since 1994, and so everything from borders to kindergartens will stay open and his 9.5 million people will not be deprived of their cinemas, theatres or football season.

“There are no viruses here,” the burly former collective farm boss told Belarusian state television beside the rink. “Sport, especially the ice, this ‘fridge’ – it’s the best anti-virus medicine.”

In a recent meeting with officials, Mr Lukashenko offered a host of other idiosyncratic health tips.

“Wash your hands more often, have breakfast, lunch and dinner on time and, though I’m not a drinker, I joke now that you shouldn’t just wash your hands with vodka but each day have the equivalent of 40-50 millilitres of pure alcohol to poison this virus,” he told them, before quickly adding: “But not at work.”

“Go to the sauna, that’s also healthy once or twice a week. The Chinese told us that this virus dies at 60 degrees Celsius,” he continued.

“There’s no need for any panic. We just need to work, especially in the countryside. On television it’s nice to see people working there on the tractor, no one’s talking about viruses. The tractor will cure everyone there, the fields cure everyone.”

Mr Lukashenko has complained that a mass “psychosis” over the disease, also known as Covid-19, is wrecking the world economy and praised US president Donald Trump for seeking a swift return to business as usual.

Officials said on Monday that Belarus had 152 confirmed cases of Covid-19 and it announced its first death from the virus on Tuesday.

Mr Lukashenko said he believed that his country was now “at the peak” of the outbreak: “And I pray to God that by Easter this peak will have gone down.”

For all his bravado, Mr Lukashenko’s regime appears to be sensitive to scrutiny of its handling of the pandemic.

Reporters Without Borders has urged Belarus to free Sergei Satsuk, editor of the Yezhednevnik online newspaper, who was arrested on dubious bribery charges last week just days after criticising Mr Lukashenko’s attitude to the spread of Covid-19.

“This arrest is a warning to media that question the Belarusian government’s healthcare policies,” said Jeanne Cavelier, the head of the media watchdog’s Eastern Europe and Central Asia desk.

“This criminalisation of journalism in Belarus creates an unacceptable climate of self-censorship.”