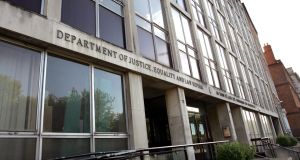 A spokesman for the Department of Justice said the extra beds would support social distancing measures in direct provision centres. Photograph: The Irish Times

A significant number of additional bed spaces are to provided for asylum seekers in direct provision centres in the coming days, the Department of Justice has said.

A spokesman for the department said the extra beds were to support social distancing measures.

He said progress was being made in establishing an off-site self-isolation facility for asylum seekers who display symptoms of the virus or contract Covid-19.

“A senior department official wrote to all residents, managers and staff at centres over the weekend to reassure them that their welfare was of paramount importance,” said the spokesman. “They were also informed that steps were being taken to protect the most vulnerable.

The spokesman said the department was working to ensure centres housing asylum seekers were well prepared and able to respond to issues relating to Covid-19.

“ There is more work to do, but this a rapidly evolving national emergency and we are following all advice from our HSE and NPHET colleagues.

“We will be announcing a significant number of additional bed spaces to our accommodation portfolio in the coming days to better support social distancing measures in centres.

“We will continue to do everything we can in line with the best public health advice available.”

Numerous calls have been made by refugee support groups and NGOs for the most vulnerable people living in direct provision to be moved to other locations such as empty hotels to try and curb the spread of the virus.

It’s understood around 20 per cent of asylum seekers have pre-existing health conditions.

The department said last week that an “off-site self-isolation facility” for asylum seekers suspected of contracting the coronavirus would be piloted as part of a range of measures to try and curb the spread of the virus.

Nasc, the migrant and refugee rights centre, warned at the weekend that asylum seekers were living in unsafe and crowded conditions where social distancing and self-isolation were almost impossible.

“We are not safe until we are all safe”, said the group in a tweet with the hashtag #MoveTheVulnerableOut which is being used as a call to action for the Government to relocate vulnerable asylum seekers during the pandemic.

The Movement of Asylum Seekers in Ireland said last week it was “appalled by the discriminatory response to the Covid-19 pandemic in direct provision”.

“The HSE posters on social distancing are useless to an asylum seeker sharing a tiny bedroom with a stranger or as many as seven other strangers, having to use communal bathrooms and congregate in a canteens for meals three times a day,” the group said.

The group called on the Department of Justice to follow the example of the Department of Housing which has said more than 560 extra beds have been secured for homeless people in Dublin who need to self-isolate.