Ibrahim Halawa gets new Irish passport ahead of release

Family fear he may be transferred to a holding cell, further delaying his release 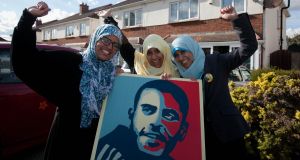 Fatima, Omaima and Somaia celebrating the news their brother Ibrahim has been acquitted on on Monday. Photograph: Gareth Chaney/Collins

The Department of Foreign Affairs has issued a new passport for Ibrahim Halawa in anticipation of his imminent return to Ireland after four years in jail in Egypt.

Members of Mr Halawa’s family are due to meet department officials in Dublin on Thursday to discuss the arrangements in place for returning him to Ireland once he is released.

This is unlikely to take place until next week because the Egyptian prison authorities have not yet provided Irish diplomats in Cairo with the necessary papers to process his release and return home.

With a three-day holiday period beginning on Thursday, there is little prospect that Mr Halawa’s release will be processed until Sunday at the earliest.

The Halawa family is concerned that he could be transferred from prison to a holding cell, leading to further bureaucracy and delay, according to Sinn Féin MEP Lynn Boylan, who has been in contact with his sisters in Dublin. “The Egyptian authorities may have to check whether there are outstanding warrants or if he owes money in the prison, but now that he has been acquitted, the paperwork should be a formality.”

Reports that the Government jet could be pressed into service to bring Mr Halawa home were dismissed as “kite-flying” by informed sources. Members of his family are not expected to travel to Cairo for his release. No decision has been taken yet by the department as to whether an Irish diplomat would accompany the 21-year-old Dubliner on the flights home.

Because the Egyptian authorities have yet to issue the papers confirming his acquittal, an appeal of the court’s decision on Monday to acquit Mr Halawa is still possible, though unlikely. The court also acquitted three of his sisters – who went back to Ireland four years ago after getting bail – in their absence.

Irish diplomats here stress that the delay in processing the case through to release is not unusual in terms of the Egyptian system. Ms Boylan cautioned that there have been cases in which detained people were simply released from jail without any notice.

Mr Halawa, who comes from an Egyptian family but was born and grew up in Dublin, faced charges relating to a 2013 protest in Cairo against the ousting of then president Mohamed Morsi of the Muslim Brotherhood.