Census shows 535,475 foreign nationals from 200 countries are living in Ireland 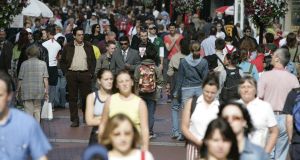 The proportion of people who are foreign nationals fell to 11.6 per cent in 2016. The CSO attributes this fall, in part, to the rapid rise in the number of people with dual Irish nationality. Photograph: The Irish Times

The Central Statistics Office (CSO) Migration and Diversity report shows that 535,475 foreign nationals from 200 different countries were living in the State on census night April 24th, 2016 , marking a drop of 1.6 per cent on the 2011 figure.

Nearly two-thirds of dual nationals, or 66,440 people, were born abroad.

As the census was carried out two months before the Brexit referendum, the rise in Irish-UK dual nationals is not believed to be connected with the vote to leave the European Union.

Polish people made up the largest group of foreign nationals living in Ireland last year at 23 per cent, with 122,515 Poles scattered across the State.

The United States, Brazil, France, Germany, India, Italy, Latvia, Lithuania, Poland, Romania, Spain and the UK all had more than 10,000 residents in Ireland, accounting for 73.6 per cent of the total foreign national population.

Ballyhaunis in Co Mayo was the town with the highest number of foreign nationals with nearly 40 per cent of its population consisting of non-Irish.

Two Longford towns followed, with 32.3 per cent of the population in Edgeworthstown and 32.1 per cent in Ballymahon made up of foreign nationals.

Galway is cited as the “most multicultural” city in the census, with 18.6 per cent of its residents recorded as non-Irish.

The 2016 census shows Ireland is becoming an increasingly multi-lingual country with 612,018 residents speaking a language other than Irish or English at home, marking a rise of nearly 100,000 people since 2011.

Despite the rise in linguistic abilities, the proportion of people who are foreign nationals fell from 12.2 per cent of the population in 2011 to 11.6 per cent in 2016. However, the CSO attributes this fall, in part, to the rapid rise in the number of people with dual Irish nationality.

Nearly half of the foreign nationals living here are married, while over half of all French, Italian, Spanish and Brazilian people living in Ireland are single. Indian nationals were most likely to be married and Latvians had the highest separated/divorced rate.

Almost half of the 293,830 foreign nationals in the State’s workforce were employed in wholesale and retail trade, accommodation and food services, manufacturing industries and human health and social work.

Some 15.4 per cent of the foreign nationals were unemployed in 2016, compared to 12.6 per cent among the Irish population.