Number of homeless ‘family hubs’ in Dublin set to double 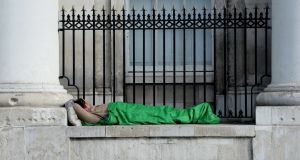 Family hubs are being rolled out as an alternative to commercial hotels and B&Bs for homeless families. Photograph: Cyril Byrne / The Irish Times

The number of homeless “family hubs” in Dublin is set to more than double, with plans to keep some open until at least 2022, an Oireachtas committee heard on Wednesday.

Eileen Gleeson, director of the Dublin Region Homeless Executive, confirmed on Wednesday nine family hubs were now open across the city with another 11 planned.

Her statement came as the Committee on Housing also heard Maynooth University academics, Dr Rory Hearne and Dr Mary Murphy, call for the use of family hubs to be discontinued as soon as possible.

Family hubs are being rolled out as an alternative to commercial hotels and B&Bs for homeless families, offering accommodation that includes cooking facilities, play facilities, as well as on-site “wrap-around” supports like homework clubs. The Department of Housing say hubs will be a “short-term” response until housing supply increases.

Since the start of the year nine have opened, at locations including Drumcondra, Crumlin, Coolock, Dún Laoghaire, Malahide and Ballyfermot. Some 304 families are in the hubs, with about 700 still in commercial hotels and B&Bs.

More hubs are planned for locations including Gardiner Street, Tallaght and Glasnevin, accommodating about 350 families. Five-year leases have been taken out on some of these.

Dr Hearne and Dr Murphy were presenting the findings of their report, Investing in the Right to a Home in which they say: “We find no international research or evidence base to justify the emerging family hubs model and note there have been no pilots to demonstrate how they might work. The danger with ‘hubs’ is that they both institutionalise and reduce the functioning capacity of families.”

They called for a “sunset clause” on hubs recomending they cease being used within 18 months.

Ms Gleeson said no family was being “held against their will” in a family hub and they were free to leave.

There was a “concern” said Eoin Ó Broin, TD, Sinn Féin spokesman on housing, that as the number of families in hubs increased and the number in commercial hotels fell, political pressure to house families permanently would decrease, leading to families spending long periods in hubs.

Committee chairwoman, Maria Bailey, TD, (Fine Gael) said she was “blown away” by the quality of accommodation and facilities offered to families at a hub she visited in Drumcondra.