Both sides of abortion debate ‘abuse existence’ of people with disabilities

‘We must stop our existence being used and abused,’ says leading disability campaigner 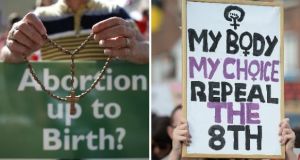 Campaigner Suzy Byrme has called on both sides in the abortion debate to stop ‘abusing the existence’ of people with disabilities in their campaigns. Photographs: The Irish Times

A leading disability campaigner has called on both sides in the abortion debate to stop “abusing the existence” of people with disabilities in their campaigns.

Suzy Byrne, an awardwinning blogger and advocate who lives with a disability in Dublin, also expressed concern at the way in which disability was being used by “right to die” advocates to justify euthanasia.

Speaking at a major conference on disability at the Mansion House, she said: “We must stop our existence being used and abused by all sides in the forthcoming referendum on the Eighth [Amendment of the Constitution.

“Equally, we have to question the growing calls for the right to die. We are not dead yet, and should not be allowed to die without the chance to fully live our lives, and let’s get living right first,” she told the conference, which was attended by over 200 people with disabilities.

Ms Byrne criticised Minister of State for Disability Issues Finian McGrath, saying he did “not address disabled people” directly, and nor was he “ accountable to us”. Instead he was “being led by parents, and carers”.

Expanding on her comments, on Sunday, she described them as a “call to arms” to people with disabilities to make their voices heard. not only on the abortion debate but on a range of issues.

“We have had years of austerity and now we are seeing the re-birth of the charity model for service delivery. We have people incarcerated in nursing homes and carers and families are shaping the agenda.

“Disabled women are hugely affected by the Eighth Amendment. Disabled women are not seen as sexual, not allowed control over their bodies when giving birth. It hugely impacts on disabled women and yet we haven’t been taking about it loudly enough. We are so busy fighting for our mere existence. We need to debate these things in the open.”

Eileen Daly, who was one of the organisers of the conference, said: “We want to be treated as equal citizens of Ireland; that’s what we want. We are equal, the same as any other person on the island of Ireland.”

The 42-year-old from Co Dublin, who uses a wheelchair, works as a guidance counsellor with the National Learning Network.

“We need to promote equal opportunities for people when it comes to working. While things have improved, we still have a long way to go on this,” Ms Daly said.

“There’s still a stigma of us against them. We need to work in partnership and show we are in charge of our own lives. I think the Government could do a lot more for us and in the run up to the budget. More money could be allocated to disability services.”

Michelle “Shelly” Gaynor, from Portmarnock and who has cerebral palsy, said people living with disabilities can struggle financially.

“Many people in Ireland struggle to find work because employers see a disability as a weakness and this is just wrong; it’s a stigma that needs to be extinguished in Ireland,” she said.

The 38-year-old said she would like to see a new era of the independent living movement to begin across Ireland.

The ‘In Their Names/In Our Time’ conference was organised by the disability group By Us With Us, a group dedicated to self-reliance and equality for people with disabilities.

The organisers described it as a “a pushback against restriction of people with disabilities to roles of supplicants”.

They also acknowledged the work of a number of disability activists who had died in recent years, including Martin Naughton and Donal Toolan, and whose legacy they sought to build upon.

The conference discussed aspects of the UN Convention on the Rights of People with Disabilities, which the Government has promised to ratify by the end of 2017.

Though Ireland was one of the first countries to sign the Convention – signing it on the first day it was possible to do so – Ireland is now the only EU country that has failed to ratify it after the Netherlands and Finland ratified it in 2016.