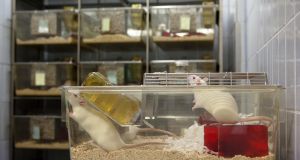 “The scientific consensus is moving on, with increasing recognition that experiments on animals are limited and often misleading regarding human health and safety,” said IAVS chairperson Yvonne Smalley. Photograph: iStock

The animals were sourced through specialist suppliers in Ireland, the UK and the US at a cost of almost €200,000.

A further €3,000 was paid to dispose of carcasses, with all animals used in experiments at UCC euthanised by qualified personnel in accordance with relevant legislation, according to UCC.

It emerged recently that nearly 110,000 live animals were used for research purposes at Trinity College Dublin over the past five years.

This prompted criticism from animal welfare groups and the novelist John Banville, who said the use of live animals in university experiments was “absolutely disgraceful”.

“If the animals don’t suffer, why don’t [the researchers] volunteer themselves?” he asked.

The Irish Anti-Vivisection Society (IAVS) has also criticised the use of live animals in experiments at UCC, and has called for stricter regulation of the practice from the Government.

It said it was “appalled that UCC is failing to address the pain and death it causes to animals, with their death toll remaining broadly static at 4,000 to 4,500 a year”.

“The scientific consensus is moving on, with increasing recognition that experiments on animals are limited and often misleading regarding human health and safety,” said IAVS chairperson Yvonne Smalley.

“The IAVS demands proper regulation from [the authorities] – they need to show some leadership, stop rubberstamping these cruel practices and start challenging these institutions on behalf of the public and defenceless animals,” she added.

UCC vice-president for research and innovation Prof Anita R Maguire said in a statement that alternatives to live-animal experiments are widely used by the university, but the use of animals had produced beneficial results that could not otherwise be achieved.

Projects for which live animals are used at UCC include research in areas such as irritable bowel syndrome, obstetrics and gynaecology, anxiety and depression, and cardiovascular disease.