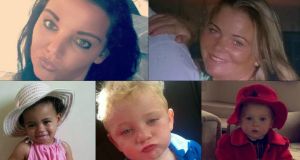 The sole survivor of a fire at an apartment in Clondalkin, Dublin, last month is making “slow progress”, a relative of the family has said.

Bridget ‘Biddy’ O’Brien remains in a critical but stable condition in St James’s Hospital where she has undergone extensive skin grafts.

Ms O’Brien was the only person to survive the fire in the early hours of March 8th, in which her two children Holly (3) and Jordan McGinn (4) died. Her cousin, Anne-Marie O’Brien (27), her daughter Hannah-Paris (2) and her unborn son AJ also died in the fire at a facility for women moving on from domestic violence.

Jim O’Brien, a relative and manager of Bray Travellers Development Group, said he had been speaking to Biddy’s brother Thomas, who said she was “making very delicate, slow progress”.

“The doctors have begun to remove bandages in the last few days and they are happy with the healing, but she is scarred and still very heavily sedated. She is fighting and she is strong but there is a long journey ahead of her yet,” said Mr O’Brien.

“She has a strong family around her and they are there by her bedside round the clock.”

Asked how Ms O’Brien’s husband, Jamie McGinn, was, he said he was “coping”.

“Jamie and Biddy lived for their children. Right now, I think, all his and all the family’s attention is on Biddy,” he said.

“There is no one saying things are going to be fine. She still has a long, long way to go but there is slight progress and a silent prayer goes a long way.”

Fiona Ryan, chief executive of Sonas Housing, which runs the facility in Clondalkin for women an children, said the apartment and three adjoining ones remained vacant awaiting refurbishment. Three families have been resettled in alternative Sonas properties in Clondalkin, she said.

She said the cause of the fire had not been identified to Sonas Housing by Dublin Fire Brigade and investigations were ongoing.