Barriers to work for people with disabilities to be lifted 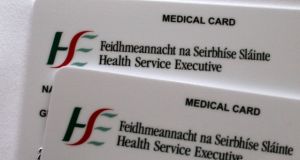 A “substantial” increase in the amount a person with a disability may earn before losing the medical card has been promised by the Minister for Health, Simon Harris.

He was speaking at an event where the Minister for Social Protection, Leo Varadkar, also pledged that those on long-term disability payments would be able to keep their free-travel pass for five years once they take up work.

They were joined by the Minister of State for Disabilities, Finian McGrath, at the publication on Thursday of a report, Make Work Pay, on how to better support people with disabilities in paid employment.

The report was produced by an interdepartmental group chaired by former director of the Economic and Social Research Institute (ESRI), Prof Frances Ruane, and concludes that the majority of those on long-term disability payments would be better off in paid employment.

However, they currently face significant financial and other obstacles.

The most frequently raised disincentive for people on a disability payment to taking up a job was fear of losing their medical card. The report recommends that the earnings disregard – the amount one can earn per week and retain the medical card – be raised from the current €120.

Mr Harris said he was “determined to address these concerns directly” and his Department was working with the HSE and the Department of Social Protection “to ensure that people with a disability have all the information they require about their medical card, and its retention, at the point where they are making a decision about current or future employment”.

He committed to a “substantial” increase in the current disregard.

Mr Varadkar said he would “drive implementation” of the report’s 24 recommendations.

Among these are that disability allowance for 18-22 year-olds be restructured with a focus on education and training, and, that reinstatement of allowances for those whose employment does not work out be fast-tracked.