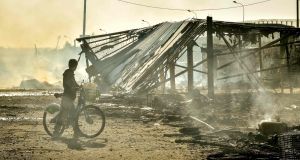 The dismantling of the illicit Calais camp in October is believed to have caused many of its 10,000 inhabitants to disperse to other areas, including the port city of Cherbourg which deals mostly with traffic between Ireland and France. Photograph: Philippe Huguen/AFP/Getty

The destruction of the Calais “Jungle” camp may be contributing to increased attempts by migrants to stowaway in cargo bound for Ireland, expert observers have warned.

The warning comes following the discovery on Sunday of 14 migrants in the back of a lorry which had been carrying fruit from Cherbourg to Rosslare Europort.

The 11 men, two women and a child in the back of the lorry were all from Afghanistan and Iran, and one of the men was taken to Wexford General Hospital as a precaution following the 16-hour crossing.

Immigrant Council of Ireland chief executive Brian Killoran said the dismantling of the illicit Calais camp in October has caused many of its estimated 10,000 inhabitants to disperse to other areas, including the port city of Cherbourg which deals mostly with traffic between Ireland and France.

“Breaking up the Calais camp does not mean the people are gone completely. It means that they’re dispersed and they’re potentially going to look for other routes,” he said.

“If it’s a case that you’re looking at what your options are, you know that they’ve broken up the Calais camp. You might look at one or two other options to go and maybe [transit] is more likely from Cherbourg,” he added.

During a visit to Cherbourg last year, the council said it encountered about 200 migrants sheltered in a disused church, many of whom had relatives living in Ireland and identified the country as their desired destination.

Mr Killoran said those involved were fortunate to survive the ordeal in light of the grizzly discoveries of other groups of migrants across Europe who perished during similar journeys.

“There’s been lots of documented incidents over the last number of years with people in containers across Europe who thought it would be opened after a certain amount of time but it didn’t get opened for another day, and unfortunately they suffocated or froze to death.”

Irish Road Haulage Association president Verona Murphy said a lorry owned by her, which was in France and en route to Ireland via Cherbourg, was broken into by six men. She said the men managed to break the lock on the rear doors before being scared off by the driver.

The incident happened some four hours south of the north coast of France, and Ms Murphy says Irish-bound hauliers are reporting an increase in the number of similar incidents since the Calais camp closed.

Whereas the port of Calais only serves English-bound traffic, she says that since moving further afield migrants are now targeting any northbound goods vehicle in which they may be able to stow away.

“It’s everywhere in France, it’s now very opportunistic. As opposed to in Calais they were everywhere and everybody was very vigilant,” she said, before continuing: “The thing about Calais was you could go into England. Now they have to take their opportunities because they’re so far away from any port. Once the truck is on the right side of the motorway heading north then they know it’s heading for either Ireland or the UK.”

Ms Murphy said the authorities in the UK and Ireland carry out equally rigorous security checks on inbound cargo to locate illegal passengers.

Commenting on Sunday’s discovery, the Irish Refugee Council called on the Government to aid the safe passage of refugees to Ireland by increasing intake via relocation and resettlement schemes as well as humanitarian visa and admission programmes.