Inspection of Highwater Lodge in Wexford finds punishments such as food limits, fines 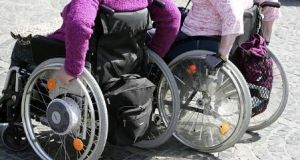 Residents at a centre for adults with disabilities were frequently punished while one underwent “inappropriate personal examinations” by staff, an inspection by the health watchdog has found.

It followed a previous inspection in July 2016 which had found several areas of major and moderate non-compliance with national standards.

This latest report found staff under-trained, inadequate fire safety to ensure residents’ safety and an inability at times to protect residents from the aggressive behaviour of one resident.

Among the “standard operating procedures” in place were two providing guidance on how to conduct “personal examinations of a resident”. These were “of the type which should only be conducted by an appropriate healthcare professional for the purpose of health assessment”.

“There was no rationale documented for this practice. Staff reported the resident requested these examinations but this issue had not been addressed in any of the guidance in the management of behaviours of concern.

“The provider was required to ensure the practice of inappropriate personal examinations...stop immediately and all documentation guiding staff to conduct such examinations was to be removed the following day.”

Terminology used in the centre was “inappropriate”, says the report, with references to residents being obliged to “comply”, family visits referred to as “access” and prescribed consequences for some behaviours explicitly described as “punishment”.

One resident’s care plan detailed a requirement that they leave their mobile phone with staff at night.

“There was no documented rationale for this other than ‘health and safety’ reasons... It was clear from the documentation that the resident did not wish to leave their phone with staff and that there was a punishment applied if they did not hand over their phone.”

Among structures and rules were, “punishment regimes including the removal of personal property and the withholding of edible treats”. Documents on behaviour support emphasised behaviour modification.

“Various documents presented a significant risk of abuse to residents...The use of punishment was evident throughout and was identified in documents as such.

“Guidance for staff in relation to behaviour that might result in the damage of items was that the resident involved was to pay for the item and that the staff on duty were to apply this charge immediately.”

The centre was told by inspectors this was to cease immediately.

Fire safety was inadequate. Staff training involved e-learning courses, “no on-site or practical training had been provided”, and, no evacuation plan had been completed. Fire hazards found included candles in residents’ rooms, build-up lint in tumble-dryers, large amounts of combustible material nearby and poor management of smoking.

“The inspectors were concerned that these and other issues related to an overall lack of fire safety in the...centre.”

Concerns reported to Hiqa about the physical assault of one resident on another were raised. The provider said their solution was to remove other residents from the living area, despite their wish not to leave, to ensure their safety when necessary.

Stepping Stones Residential Care Ltd, which operates the centre, outlined its plans to address concerns including the cessation of punishments and inappropriate personal examinations.