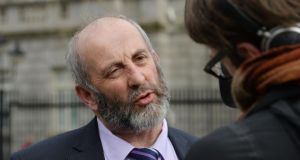 Danny Healy-Rae: “Two glasses or three glasses of Guinness did not cause an accident for anybody,” according to the Kerry TD. Photograph: Alan Betson

A young woman who was seriously injured by a drunk driver has described as disgusting comments by the Kerry TD Danny Healy-Rae about the role of alcohol in road deaths.

At an Oireachtas transport-committee hearing yesterday Mr Healy-Rae told Minister for Transport Shane Ross that alcohol was not to blame for many drink-related deaths on the State’s roads. The TD said that “bushes sticking out in the road” were in fact among the main causes.

The committee was debating a proposal by Mr Ross to change the law to removal a penalty that allows a driver to receive three penalty points and a €250 fine for a first offence of driving with a blood-alcohol level of between 50mg and 80mg of alcohol per 100ml of blood. Mr Ross wants to replace this with a mandatory driving ban.

A woman called Éimear, who preferred not to be fully identified, tweeted on Thursday that she had almost been killed by a drunk driver in Mr Healy-Rae’s constituency. She had been a passenger in a car struck head-on several years ago, she said.

“This accident happened before 5pm on a Saturday, when you would probably least expect something like this to happen,” she told The Irish Times.

Éimear said that her injuries still affect her daily life and that she was outraged Mr Healy-Rae would suggest it was acceptable to drive after consuming alcohol.

“I do believe he needs to be reminded of the number of alcohol units in a pint and the studies which have looked into the influence of alcohol on a person’s driving,” Éimear said. “I find it disgusting that he can imply it is okay for accidents like these to happen as long as no one dies in his constituency.

“I would very much like to meet him face to face and discuss the long-term implications of [my] car accident, show him the effect it had on my university exams and the physical repercussions which will never go away.”

Éimear said that if Mr Healy-Rae was worried about strict drink-driving laws damaging rural pubs, many private bus companies would “be happy to work a Friday and Saturday night to bring people to and from these pubs”. “After all, a minibus would not be expensive to hire for a night if 10-15 people are travelling and splitting the cost. Not only would this support local businesses; it would directly combat rural isolation and make roads safer.”

On Wednesday Mr Healy-Rae said the “massive increase in the volume of traffic on our roads” had contributed to the rise in fatalities last year, as had the longer distances people had to drive.

He also blamed “bridges that were built over 200 years ago that are not fit for traffic” and said crashes were happening because people were “walking practically halfway out on the road because the briars and the bushes are sticking out”.

Before the meeting of the Oireachtas committee, which was scrutinising Mr Ross’s Road Traffic (Fixed Penalty – Drink Driving) Bill 2017, the Minister said publicans should be arranging buses home for their customers rather than engaging in “cynical lobbying” over new drink-driving proposals.

He accused the Vintners Federation of Ireland of demonstrating “naked self-interest” by opposing the measures. Mr Ross noted figures compiled by the Road Safety Authority between 2008 and 2012 found that alcohol was a factor in more than a third of fatal crashes and that arrests for drink-driving increased to a high of more than 8,000 last year, after consecutive falls since 2016.

The publicans’ federation said the Minister was “engaged in a cynical exercise in deflecting attention from his inability to manage other elements of his portfolio”. Its chief executive, Pádraig Cribben, said the drink-driving laws in place today would work if they were implemented.

“Statistics show the majority – over 80 per cent – of those involved in such fatal accidents are at least twice the legal limit. That is where the focus of attention needs to be and not on the 1 per cent the Minister is targeting.”

Mr Cribben said the Minister was incorrect to suggest, based on the Road Safety Authority’s figures, that 35 lives would be saved were his legislation introduced.