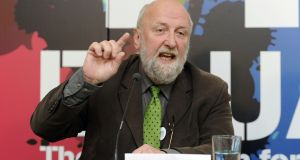 Chief executive of Barnardos Fergus Finlay: Too many children were “automatically granted, on the day of their birth, the right to stand in queues for services that never came”. Photograph: Dave Meehan

Ireland’s rate of child homelessness, which has risen by 287 per cent in three years, is unmatched anywhere in Europe, the Irish Society for the Prevention of Cruelty to Children has said.

Grainia Long, the organisation’s chief executive, said Ireland occupied a “unique” position in not being obliged to provide accommodation to its children.

Referring to a Housing Agency report from 2016, she said it was “astonishing” one-third of the country’s homeless population were minors.

Ms Long was addressing a conference marking the fifth anniversary since the passing of the children’s rights referendum.

“I would challenge anyone to find a number like [the 287 per cent increase] anywhere in Europe in the last three years,” she said, and spoke of children who spend considerable portions of their lives in bed and breakfast accommodation.

“The State in Ireland is unique in not having an obligation to house homeless children. That is unique in Europe,” she said.

“We have a much stronger Constitution now in terms of the rights of the child but we have not followed that up by looking across all of the ranges of different pieces of legislation and saying: what do we now need to strengthen?”

It is a lack of such rights that framed Wednesday’s symposium in which a broad panel of speakers addressed the question of how far children’s rights had come since the passing of the referendum.

Housing and homelessness was a dominant theme in terms of how the country has fallen short in living up to its aspiration of placing children at the heart of society.

Former senator and chair of Early Childhood Ireland Jillian van Turnhout recalled attending a meeting at a hotel in which she saw schoolchildren eating breakfast and feeling she was intruding in their home.

Barnardos chief executive Fergus Finlay said the Yes vote had delivered the “beginnings . . . of a triumph for children” but there were shortfalls. “We didn’t have 3,000 homeless children when we fought that referendum; it never even occurred to us that we might have,” he said.

Among the successful outcomes, however, Mr Finlay pointed to the recent creation of the Department of Children and Youth Affairs, which “frequently punches above its weight”, and Tusla, the child and family agency.

To illustrate the reality of life for children today, Mr Finlay said that if about 200 children were born on the day the referendum passed, just 160 were born as first-class citizens.

Of the 40 born as second-class citizens, he said, 14 were born into poverty and 10 with some form of disability.

“They were automatically granted, on the day of their birth, the right to stand in queues for services that never came,” he said. “[With the referendum] we set out to achieve one thing and we are not there yet . . . the right of children to be listened to, to be heard and to be respected.”

Gareth Noble, a litigator in the area of children with disabilities, told the symposium he had been very concerned at the lack of ambition captured in the children’s referendum and had questioned what practical difference it would make.

He said questions remain around supports for children with special needs, educational requirements, homeless children and those relying on social workers constricted to regular office hours. “If you are a child who is reliant on our disgraceful mental health services, what has the referendum done for that?”