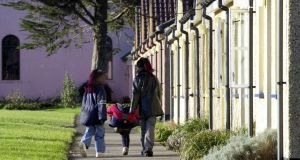 Asylum seekers who spend more than nine months in the direct provision system without having their case decided on are to be given the right to work, become self-employed or access training.

The changes, which are expected to be approved by Ministers next week, will see a move away from the current system which does not allow adults seeking asylum in the State to work until their immigration status is decided.

The move is an attempt to bring the law in line with a Supreme Court judgment delivered in May which found the absolute ban on people in direct provision working was unconstitutional “in principle”. The Government believes that opting into an existing EU directive is the best way to comply with the ruling.

Minister for Justice Charlie Flanagan is to bring a memo on the subject to Cabinet next week. Under the Minister’s proposals, those who meet the criteria will be entitled to work by way of renewable six-month permits.

However, the right will be subject to some restrictions, such as areas of the economy in which those concerned can work.

The direct provision system was established in April 2000 and sees asylum seekers accommodated in privately-operated centres. Meals are provided and residents are entitled to a weekly allowance of €21.60. More than 4,400 people were living in direct provision at the end of March, some 564 of them for more than five years.

Last May, a Burmese man who had spent eight years in direct provision before getting refugee status unanimously won his Supreme Court appeal over laws preventing him working here before his status was decided.

The seven-judge court adjourned making any formal orders relating to their ruling for six months to allow the legislature consider how to address the situation.

The Government set up a group that spanned a number of departments to help formulate a response to the Supreme Court, which must be provided by the end of this month.

Sources suggested that because Ireland is moving to comply with an EU directive, the changes could be made rapidly. It is not clear, however, if the changes can be applied retrospectively.

Those eligible to work will be given a “temporary and renewable” six-month stamp from the Department of Justice, which will also allow them to become self-employed or access vocational training.

However, access to work will be allowed to “certain but restricted sectors of employment”, and these areas of work will be kept under review.

The right to work will not be given to those whose status is decided within nine months, or those who seek to appeal or review a decided status.

The Irish Refugee Council had called for someone to be given the right to work after six months of waiting for an asylum decision “and no restrictions be placed on what professions a person can enter and that self employment also be allowed”.

It is also understood the new system could be reviewed in situations where there are high levels of emigration and increasing unemployment in the economy generally.

A consequence of Ireland adopting the European standards while the United Kingdom retains a unique system to deal with the same issues may lead more people to seek asylum in the State, the report adds.

Access to employment while children are in school would also allow single-parent families in the direct provision to better support their families, it says.