Halawa on the ‘Late Late’: I did not go to Egypt to get into politics

Speaking on The Late Late Show, Ibrahim Halawa has denied he was member of the Muslim Brotherhood before or during his four years in an Egyptian prison. Video: RTÉ 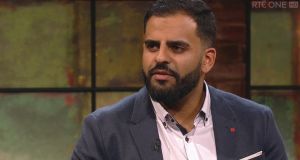 Ibrahim Halawa on the Late Late Show: he said he wants to help the homeless and people who are falsely imprisoned

Ibrahim Halawa has said he did not travel to Egypt to become involved in politics and had planned originally to go to Ibiza with friends instead.

The 21-year-old, who spent four years in prison in Cairo before being cleared of charges relating to mass protests in the Egyptian capital in 2013, told Ryan Tubridy on RTÉ’s Late Late Show that he was “a normal 17-year-old.

“I didn’t know about politics and didn’t care who was president because it didn’t affect me,” he said.

Mr Halawa, from Firhouse, south Co Dublin, denied supporting the Muslim Brotherhood, who protested against the ousting of president Mohamed Morsi in a military coup.

“I didn’t agree with what was going on with the Muslim Brotherhood being in charge of the Government at the time but they were the elected government by the people whether any of us like it or not,” he said.

“I was a 17-year-old you don’t now what the Muslim Brotherhood . . . Of course I’m not a member . . . I do not support the ideology. I was imprisoned with them and I differ with them on a lot of points. A lot of people said it was a Brotherhood rally I was caught up in but it wasn’t . . . There were Christian organisations and trade union organisations there,” he said.

He said he was at the cinema when he became involved in the protest and ended up addressing the crowd.

“Two of my friends died. I had to stand up for them. It was my first time getting politically involved,” he said. “I told the crowd, use the ballot box . . . don’t use the military or to kill people.”

Mr Halawa said he took refuge in a mosque, where he filmed a video message after being told the group inside needed someone who spoke English to address the world.

He said he took a bullet during the mosque siege and his hand is still damaged from the injury.

He was arrested with three of his sisters, Omaima, Somaia and Fatima. His sisters were released on bail and returned to Ireland three months later, but he remained, and it was not until four years later that he was acquitted of all charges.

Mr Halawa, whose trial was postponed 28 times in four years, was reunited with his family last month.

Last night he told Tubridy about his four years in prison, where he experienced violence at the hands of prison officers.

“You are beaten with metal bars, chains, electric wires, sticks – anything they find. This is what they called the party in prison. This is how they did it in Egypt - in every prison it was the same thing.”

He said he went on several hunger strikes and was beaten up by a prison officer in front of his mother when he was 18.

“Prison is not like the movies; it’s so hard. I’m sad to leave some of the people I met in prison behind because of the conditions they are in,” he said.

“I went home and I couldn’t sleep in a bed back in Dublin so I slept on the ground – I had become institutionalised.”

Mr Halawa also addressed several rumours surrounding his time in prison, including one that he destroyed his Irish passport.

Mr Halawa insisted he did not go to Egypt to become politically involved.

“If I wanted to be politically active in Egypt as people would say, I would have gone to Egypt when the revolution was in 2011; I was in Ireland,” he said.

He also spoke out about his “haters” and critical and racist online commentary about him and his family.

“A girl messaged me and told me to take my award and go back to my country but then she added me as a friend on Facebook,” he said.

Looking ahead, Mr Halawa said he is going to write a book and to help people who are falsely imprisoned and to help the homeless.