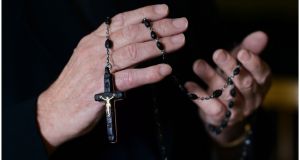 Ireland ‘still has a good percentage of church attendance’ across the denominations. Photograph: Bryan O’Brien

Ireland “remains more God-fearing” than Britain, a leading Catholic theologian has said in response to research showing limited respect among British people for the 10  commandments.

The recent findings of a YouGov poll in Britain, which showed that just six of the 10 commandments were seen to still matter to people there, reflected the “predominant practical atheism” of British society “with the assumption that this world is all there is,” Fr Vincent Twomey said.

Ireland, on the other hand, “still has a good percentage of church attendance” across the denominations. In the 2016 Census, 78.3 per cent of the population declared as Catholic, while 10.1 per cent identified as having “no religion”.

Fr Twomey, who is Prof Emeritus of Moral Theology at St Patrick’s College Maynooth, said he was concerned at the You Gov finding that 28 per cent of British people did not believe in honouring their father and mother.

It was “worrying. If respect for the old goes, euthanasia is down the road”. It would be different in Ireland where “the attachment to family life is extremely strong,” he said.

But he was not surprised that a majority of those polled still believed in honouring - or obeying - their parents. “The family unity is so primordial that even with divorce the natural attachment to parents remains strong,” he said.

The research found British people put least value on those commandments related to religious practice. Just 19 per cent believed in keeping holy the Sabbath day while 31 per cent believed people should not worship idols - defined as statues or symbols.

Not bearing false witness -  lying - came third in importance, while 73 per cent believed not committing adultery was still important.

Most British no longer mind taking the Lord’s name in vain, with only 23 per cent saying you may not use the word “God” in, or as, a curse. The proportion of Christians who felt this way was 38 per cent.

Prof of Ecumenics at Trinity College Dublin Dr Linda Hogan said some of the responses would be different in an Irish context.

“The commandments associated with religion, belonging, or the experience of religiosity,” were weakest in the survey, she said. “We don’t have the same sense of disparity here, given the high level of religiosity still experienced in Ireland.”

The YouGov question on worshipping statues/idols would probably be understood differently in Ireland due to Catholic experience, she felt, and as for taking the Lord’s name “it’s a form of expression here” while in Britain it would be “about reverence”, she said.

The YouGov low finding on the Sabbath might be due to Britain being “a more religiously plural, multi-cultural society. It may be about greater religious tolerance,” she added.