Church has lost its power and must start listening to the people, priest tells crowds 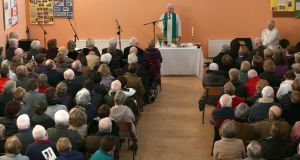 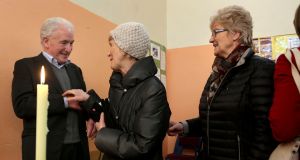 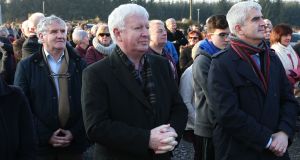 Frank Flannery looks at a big screen outside Killimordaly Community Hall during his brother Tony’s Mass of Celebration on Sunday. Photograph: Joe O’Shaughnessy

The Catholic Church’s power to dictate to people has collapsed, a silenced priest who defied a Vatican ban to say Mass in public has said.

Fr Tony Flannery was disciplined and banned from public ministry by the Vatican’s Congregation for the Doctrine of the Faith (CDF) in 2012 for views he expressed on Catholic teachings in areas such as sexuality, contraception and the role of women in the church.

Fr Flannery, who turned 70 last Wednesday, decided to mark the occasion by celebrating Mass at Killimordaly Community Centre, near where he lives in east Co Galway on Sunday. He said he feared it would be the last time he did so.

A congregation of hundreds turned out to support him and, in his homily, Fr Flannery spoke of being overwhelmed by the good wishes he had received from across the Catholic community.

Fr Flannery is the founder of the Association of Catholic Priests and he says it is crucial that the Catholic Church reforms its ways before it is too late.

“When you are 70 you don’t plan for the next couple of years,” said Fr Flannery. “Hopefully I will get health. I will write more if I do.”

“I will keep plugging away at church reform and trying to change things, because the church is in desperate need of changing. It’s losing the people at such a rate and it doesn’t need to be.”

He said the diverse attendance at the Mass showed “ the power of the church to dictate to people has collapsed”.

“People don’t allow bishops or Popes or the Vatican to dictate to them anymore. And the sooner the Irish bishops realise that and instead of issuing dictates, start listening to the people, the better.”

Fr Flannery is a Redemptorist priest and religious writer who was silenced by the Vatican’s Congregation for the Doctrine of the Faith after they disagreed with many of his views.

He said the people who supported him and came to the celebratory Mass needed to take ownership of their faith.

He said he believed he could still make a big difference on the issue of church reform, and he hoped the Vatican could learn to be more open-minded in future.

“They objected to some of my writings, and some of the things I wrote on teachings on contraception, homosexuality and women’s ordination was a big issue. I was in favour of women’s ordination, but the Vatican was saying we shouldn’t even discuss it. Things like that were a problem.”