Calls for The Orphanage development in Dún Laoghaire to be renamed 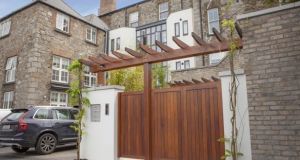 Susan Lohan of the Adoption Rights Alliance expressed astonishment at “the tone deafness of the PR people behind this”.

A former resident of a Dún Laoghaire institution now being marketed as The Orphanage by the company that redeveloped it has called for its name to be changed.

A portion of the original property on York Road in south Dublin has been redeveloped into a “luxury co-living residence” comprising four one-bed suites available at rents of between €1,200 and €1,500 per month. It is being aimed by the letting agent Brady & McCarthy at “corporate clients who want to provide an inclusive living experience for their staff”.

The building, which opened as an orphanage in about 1859 and was later operated by the Smyly Trust until its closure in 1977, was home to an average of 180 children ranging in age from five to 12 at a time. The orphanage, whose past residents include former Irish football international Paul McGrath, trained girls for domestic service while boys were typically moved on to other institutions in and around Dublin.

Senator Victor Boyhan, who lived there in the 1960s until he was 16, called for the name of the development to be changed to The Bird’s Nest.

“A bird’s nest should be cosy, warm, a nurturing place to live, and in the majority of cases that was my experience,” said the Independent Senator, who is the former chairman of the Past Residents of Smyly Homes and Cottage Homes group.

However, he accepted some children experienced “emotional and physical and sexual abuse” while living there.

“I was somewhat surprised by the name The Orphanage, I would suggest that it is a sort of provocative term or name and I don’t know what that’s about,” he said.

“I certainly wouldn’t want to live there. I think there’s a lot of sadness in the stones there, there’s a lot of bad omen there. Maybe the new people that go in there, they’ll have new opportunities as a home. That’s why I’m loath to knock the idea of co-living and [a] new use for the building. I hope the people who go there and live there will be happy.”

The institution became embroiled in controversy over its involvement in clinical trials for vaccines carried out on babies and children in orphanages in the 1960s and 1970s.

A spokeswoman for the scheme said the name reflected “the history that was there”. She added: “When you are there, it will become your adopted home”.

Susan Lohan of the Adoption Rights Alliance expressed astonishment at “the tone deafness of the PR people behind this”.

Ms Lohan told the radio programme she sits on a collaborative forum of former residents and advocates of people who were in various institutions. “The notion. . . that these places were somewhat cosy by calling them homes, that doesn’t go down well with people who were formally incarcerated in those places,” she said.

“People want them to be known as institutions and they want the full truth about what happened in those places to be known.

“I think it is important for historical accuracy to note the name that was in use in these places I think it would be more appropriate to refer back to it as The Bird’s Nest.”