Brexit reminds us of ‘miracle’ that brought France, Germany out of enmity - McAleese 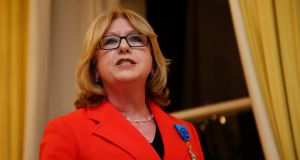 Mary McAleese on the occasion of the presentation of the Dignity of Grand Officier de l’Ordre National du Mérite. Photograph: Nick Bradshaw

Mary McAleese said that ‘faced with Brexit’ we are “ reminded of the sheer miracle that brought France and Germany out of enmity and into partnership” after the second World War.

The former Irish president gave a resounding endorsement to the European ideal after she was bestowed with one of France’s highest honours on Monday night.

Expressing her gratitute to French president Emmanuel Macron “for this special honour” which she “deeply” appreciates, she spoke of “the web of history” uniting Ireland and France.

“I think of the man who first coined the phrase that caputured the idea of a united nations of Europe ‘totus Europa ’, the Irish monk Columbanus,” in the sixth century, she said.

“Most of all today I think of those great Frenchmen and founders of our European Union, Jean Monnet and Robert Schuman. Directly after the second World War, after 50 years in which Europe was a massive killing field, in both desperation and at the depravity of humanity and with faith and hope in the goodness of humanity they turned to Columbanus’s vision of a Europe of the nations, each proud of its own identity, all working together in a voluntary partnership, for peace, progress and prosperity,” she said.

She recalled how in 1950 at an event in France’s Luxeuil to mark the 1,400 anniversary of Columbanus’s birth, both men revealed “their great ambition” to other European leaders.

“Schuman spoke of ‘St Columban, this illustrious Irishman who willed and achieved a spiritual union between the principal European countries of his time. He is the patron saint of all those who now seek to build a united Europe’,” she said.

Then taoiseach John A Costello responded that “all statesmen of today might well turn their thoughts to St Columban and his teaching. History records that it was by men like him that civilisation was saved in the 6th century.” She added: “And there are those of us who might be worried that civilisation might be needed to be saved again.”

She continued: “Faced with Brexit we are reminded of the sheer miracle that brought France and Germany out of enmity and into partnership, of the walls that came down thanks to their witness, of the many nations now drawn into this remarkable and practical partnership.”

Presenting the honour French Ambassador Stéphane Crouzat praised Ms McAleese as “ a president who built bridges where there once were divisions.” She “showed Europe and the world that peace and coooperation could be achieved after decades of distrust.”

He observed that it was also “rare for a woman anywhere to be elected to the highest responsibility of the State.”

He spoke of her “two mandates to ‘building bridges’: bridges between communities, between genders, between social classes, between religions, and between States.” He recalled how “in 2011, at the end of your second mandate, you welcomed Queen Elizabeth II to Dublin, the first state visit of a British sovereign in the Republic of Ireland.”

Recalling Ms McAleese’s several visits to France as president, he hoped “the French and Irish people will continue to be inspired by your example, and continue to build beauiful bridges between our two countries.”