‘We have made a complete balls of how we’ve managed this from day one,’ says councillor 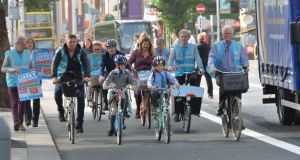 Plans for a new cycle route on the Liffey quays have been shelved. Photograph: Alan Betson 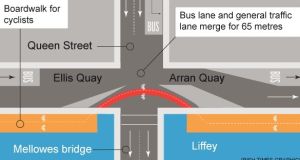 The proposed cycle path on the Liffey quays

The National Transport Authority (NTA) has pulled funding for the construction of a segregated cycle path along the Liffey quays, citing the failure of Dublin City Council to select a route for the scheme over the last five years.

The council’s transportation department has presented eight different “preferred routes” for the 6km path from Heuston Station to the East Link bridge since 2012, but has failed to secure the sanction of councillors for any of the options.

The most recent option, proposed last May, involved the construction of a boardwalk over the river on Ellis and Arran Quay, which would have added up to €3 million to the €20 million cost, and required the scheme to be submitted to An Bord Pleanála.

Councillors asked in May that the option be subject to further assessment before any decision was made.

Brendan O’Brien of the council’s traffic department told councillors that the NTA subsequently suspended funding for the project pending an independent evaluation of the routes.

“We have had discussions with the project funders, the NTA, and the NTA came back and said they are suspending funding for the project, and for any design work, until such time as they commission a third party independent review of all the options,” Mr O’Brien said.

“We started this process in 2012 but we don’t have consensus on the route to provide any sort of time line for a statutory process or construction . . . at the moment Dublin City Council has stopped work on the project,” he said

No date had been given by the NTA on when they would conduct this review, councillors were told.

“We have made a complete balls of how we’ve managed this from day one,” Fine Gael councillor Ray McAdam said.

“ People will probably be killed before we put in a proper cycle route along the quays,” he said.

Last October the transportation department proposed facilitating the continuous cycle route by implementing a permanent ban on private cars and lorries from Ellis and Arran Quays, diverting traffic for 1.5km through the residential streets of Stoneybatter and Smithfield.

The diversion was necessary to get around a particularly narrow section of the quays between the James Joyce Bridge and the Four Courts.

However in May, Mr O’Brien said although this was the “best solution” for the route, he did not propose pursuing it because it had met with considerable opposition from councillors, residents, schools and businesses.

A previous route, which had been selected in 2015, had involved diverting buses through an apartment block that was under construction in Smithfield. The apartments are now completed and occupied.