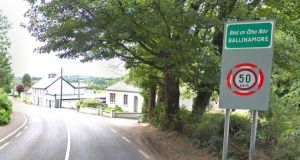 The Department of Justice said it was working to secure new accommodation centres for International Protection applicants, and had reached agreement with a provider in Ballinamore. Image: Google Streetview.

A “crisis meeting” took place in Ballinamore, Co Leitrim on Sunday night over Department of Justice plans to accommodate asylum seekers in the town.

The meeting followed a highly charged gathering last Wednesday which heard that up to 130 people were to be accommodated in 25 apartments at The Rock, a recently completed development just outside the town centre.

Around 350 people attended Sunday’s meeting, at which it was agreed to mount an around-the-clock silent protest at the location proposed to house the asylum seekers.

Several of those present spoke to say they did not object to asylum seekers moving to the town but that the number coming was too high when Ballinamore’s population of 900 people was considered.

To demonstarte their oppositon to the plan, close to 200 people walked silently to the apartment block after the meeting.

Local Oireachtas members have sought a meeting between community leaders and Minister of State for Integration David Stanton about the matter. A briefing is scheduled to take place in Dublin on Thursday.

The text message invitation to the “crisis meeting” was circulated among locals over the weekend and it warned that “the future of our town is at stake”. It advised that only local people and local businesses would be allowed to attend but said people from surrounding parishes were also invited “as it will affect their children also”.

Sinn Féin TD for Sligo-Leitrim Martin Kenny said the decision to accommodate asylum seekers in Ballinamore had already been made by the Government.

Ahead of the meeting, a number of people in Ballinamore told The Irish Times they had sympathy for asylum seekers and refugees fleeing persecution, but that the town did not have the facilities or services to support such a population increase. They also criticised the lack of consultation and learning at Wednesday’s meeting that a contract between the department and a service provider had already been signed.

“I have no problem with anyone being accommodated but it is too many. It is unfair to house people without facilities,” said one woman who asked not to be identified.

She said there was one GP in the town who was already over-stretched and she questioned whether language services and other supports would be provided in local schools . “It’s nice to look after our own too ,” she said.

Local woman Rita Maher said some people were getting carried away with “the hype”. “I think we need to get some balance here,” she said. “If these people are from Syria they need our love, our support and our kindness”.

Colm Gilheany said the predominant feeling locally was that 130 people coming was too many for a town like Ballinamore, and would be the equivalent of 200,000 people being moved to Dublin.

Another local man Al O’Rourke said his personal view was that anyone forced to leave their home country was welcome.

“I do not forget that some of my own family went to the United States in the 1800s and they were the equivalent of refugees ,” he said.

However, Mr O’Rourke said he was unhappy that the Government had not consulted on the move locally beforehand and he believed there should be a greater focus on solving the State’s homelessness problem.

Much of the online commentary regarding the plan was critical and referred to Ireland’s homelessness crisis, saying these people should be helped first.

Mr Kenny said it was not “an either-or” situation and that the homeless and refugees needed support.

A Department of Justice spokesman said it was working to secure accommodation for international protection applicants, and had reached agreement with a provider in Ballinamore.

He said the number of people arriving to seek protection was up 53 per cent so far this year, and 1,500 people were now in emergency accommodation such as hotels and guest houses, because of pressure on existing centres.

He said he could not say when the asylum seekers would arrive in Ballinamore but Fine Gael Senator Frank Feighan said he understood they would be coming on a phased basis over the next six weeks.

“I think the people of Ballinamore are welcoming but they do have unanswered questions,” he said.