Azzam Raguragui remembered for his kindness and devotion to family 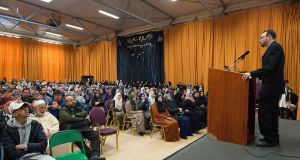 Friends and family of Azzam Raguragui (18), who died after being stabbed in Dundrum, Dublin, earlier this month, have described his kindness, loyalty, sense of fun and his devotion to his mother and father.

About 600 people, many of them young people from across south Dublin, attended a memorial service to honour the Leaving Certificate student at Clonskeagh mosque on Sunday evening. His father Abderrahmane Raguaragui and mother Hajiba Elouaddaf both spoke, as did many friends.

The funeral of the young man, who was due to sit his Leaving Certificate next month, took place on Friday at the mosque.

He had been on his way to Friday prayers at Clonskeagh the week previously, with a number of other Muslim teenagers when they came upon another group of teenagers at Finsbury Park, Dundrum, at 8.10pm.

An effort was made by the other group to steal Mr Raguragui’s bike. When he resisted, one of the teenagers in the other group stabbed Mr Raguragui, who slipped as he tried to flee before being fatally wounded. He had an older sister and younger brother.

A montage of photographs of Azzam taken by the Islamic Cultural Centre’s youth group, showing him in class, on hikes and messing with friends was displayed on a large screen, followed by a video of family and friends paying tribute to him.

Earlier, his mother said she had been alone with Azzam’s brother when she got the news her son had been critically injured and was in St James’s Hospital. Speaking in Arabic, her words were summarised by a translator afterwards.

He told how she had described as “very difficult” seeing the son she had raised since a baby, “with blood on his face and body”and the realisation he was gone. She said she used to urge him to study when he wanted to go to the park to see friends. Shortly before he died he told her, “Mum, one day you will be proud of me”.

She knew she had lost her son, she continued. “But I feel you now are all my sons,” she said turning to a large group of boys gathered along the side of the hall, and she urged them to “do good deeds” to honour Azzam.

The teenager had been a “very compliant son to his father and mother” who had always “delivered his promises”, Azzam’s father said.

Friends repeatedly referred to him as a “brother”and someone “who was always there for you” and “would never let you down”. He always had a “smile for everyone”.

One boy described how he and Azzam would talk about their plans for the future, discussing whether they would do engineering in UCD. “He always said, no matter what, he wanted to look after his family. He wanted to make his family happy.”

Another described going on a trip to a camp and how his younger brother was accompanying him. “I really didn’t want him to come and he was really annoying me on the drive there. It was four hours. Azzam kept intervening and he said, ‘I know how you feel, but he’s your younger brother. You have to be kind to him.’”

Earlier, at the pro-Cathedral Archbishop Diarmuid Martin of Dublin, said the recent spate of knife crime and stabbings among young people was “truly a disastrous blind alley”.

He said has been “shocked and saddened” by recent stabbing incidents involving young people.

Varadkar says Government pushing for quicker easing of lockdown 14:28
Sunniest spring on record in Dublin with rainfall 70% below average 14:26
Housing supports should be increased if Covid-19 payment is cut – ESRI 14:02
14 bank accounts frozen as five men arrested over links to global crime gang 13:36
Taoiseach says €350 pandemic payment to be cut for some part-time workers 13:15