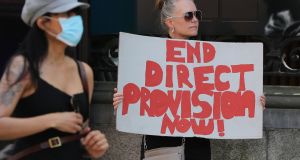 A report by a Government-appointed expert group into ending direct provision and changes to the international protection process has made a series of recommendations to improve the system for asylum seekers. File photograph: Nick Bradshaw

Independent monitoring of centres, a reduction in the time an asylum seeker must wait before entering the labour force and vulnerability assessments, are to be introduced as part of a series of changes to the State’s asylum system.

The Department of Equality and Integration and Department of Justice confirmed on Wednesday that asylum seekers must wait six months before applying to work, down from the nine-month wait introduced two years ago.

Work permits will remain valid for 12 months rather than six, asylum seekers will be able to work in public health jobs subject to qualifications, and applicants who received a first instance decision on their asylum claim before 2018 will be entitled to apply for a work permit, said Minister for Justice Helen McEntee.

Minister for Equality Roderic O’Gorman, who has responsibility for direct provision, said a “formal system of vulnerability assessments” would be introduced from December along with independent monitoring of direct provision centres by the Health Information and Quality Authority and the “phasing out” of emergency accommodation centres.

He did not, as was anticipated, make any formal commitment around access to driving licences but said legislation addressing the issue would be included in legislation from Minister for Transport Eamon Ryan before the end of the year. Ms McEntee said her department was engaging with the Banking and Payments Federation to deal with access to bank accounts for asylum seekers.

The announcements came in conjunction with the publication of a report by a Government-appointed expert group into ending direct provision and changes to the international protection process.

The recommendations include the introduction of State-owned temporary reception centres where applicants would spend their first three months and a new housing model led by local authorities.

Their findings will inform the Government White Paper which is scheduled for publication in December. A “dedicated group of senior officials”, including secretaries general from a number of Government departments, has been appointed to examine the group’s recommendations and will meet on a weekly or fortnightly basis until Christmas.

The expert group, led by former secretary general of the European Commission Dr Catherine Day, called for the new system to be fully implemented by mid-2023 and for the transition period to begin as soon as possible. The proposed model would cost €35.9 million less than what direct provision cost in 2019.

After three months in State-run accommodation, applicants should be transferred to own-door accommodation overseen by local authorities, says the report.

The new system should be able to process an average 3,500 protection applications per year, while any person who had been in direct provision for more than two years by the end of 2020 should receive leave to remain for five years to help alleviate backlog, says the report.

Unaccompanied minors who turn 18 should remain the responsibility of Tusla while their social worker should be “legally obliged” to seek advice on filing an asylum applications.

The International Protection Office should be “given sufficient resources to handle a greater share of cases in-house” while the Legal Aid Board should be “sufficiently staffed and resourced” in supporting applicants.

Dr Day said the Covid-19 pandemic had “starkly underlined” the unsuitability of direct provision and a “more humane” process that complied with Ireland’s international obligations was needed. A whole-of-government approach, continued political oversight and a clear implementation plan with “fixed-time limits” is important, she said. A “legally binding mandate” should also be introduced to ensure all local authorities agree to come on board, she added.

The group was “acutely aware of housing challenges” in Ireland and decided an allowance modelled on the homeless HAP scheme was the most workable option, said Dr Day.

She underlined the group was “not asking for any privilege for asylum seekers” and “no jumping of the housing list”.

Recommendations were influenced by the Government’s International Refugee Protection Programme which has resettled thousands of Syrians in Ireland, said Dr Day, adding that she was “very surprised to discover we have different kinds of refugees in Ireland, and some get much better support and treatment than others”.

The UN Refugee Agency called on the Government to “urgently implement” the recommendations and advised officials to start working to reduce waiting times on applications rather than waiting for the outcome of the White Paper.

Fiona Finn, director of Nasc, the Migrant and Refugee Rights Centre, who was a member of the expert group, said the implementation of legally binding deadlines for all new applications from 2023 and the introduction of a dedicated taskforce to clear the existing backlog of cases by 2022 was “essential to the success” of the proposed system.

“Many of these recommendations will require institutional change and the overhaul of outdated and inefficient systems and this will require political will and commitment to these changes,” she said.