Legislation for affordable housing due ‘within weeks’

First homes under scheme to be available for purchase next year, says Minister 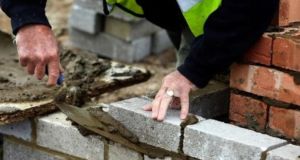 In relation to the number of social homes that would be built this year, the Minister said the figure would be “around 7,000 or so”.

Legislation for an affordable housing scheme, which will allow low and middle income workers to buy State subsidised homes, will come before the Dáil within weeks, Minister for Housing Darragh O’Brien has said.

Budget 2021 allocated €75 million for the shared equity scheme to provide 2,000 affordable purchase homes next year. However, Mr O’Brien could not say how many of these homes would be completed next year.

Speaking at a post-budget briefing on Wednesday Mr O’Brien said the scheme was “at an advanced stage” and would be “up and running” next year.

The State’s the last affordable housing scheme was discontinued in 2011. A new scheme was announced five years ago in Budget 2016 but was never enacted.

Brian Hayes, chief executive of Banking and Payments Federation Ireland on Wednesday said the banking industry had been in talks with Government “for a number of months” in relation to the scheme and there would be “sufficient interest across the sector” in participating .

The expectation is that the banks and Department of Housing would put money into a special vehicle under the auspices of some arm of the department, which would then be willing to put up some of the equity to help finance the purchase of a new home.

It is understood it will be possible for the homeowner to buy out the equity stake held by the special purpose entity in the future, based on market value at the time.

In relation to the number of social homes that would be built this year, Mr O’Brien said the figure would be “around 7,000 or so” but this would include the acquisition of privately built units. Figures released last week revealed that only 725 social homes had been built in the first six months of this year.

Meanwhile, the Labour Party criticised the Government’s help to buy scheme, labelling it as a “farce” and as an incentive to drive up prices.

Party leader Alan Kelly said he respected the Government’s ambition for housing but questioned the State’s ability to deliver on its targets for 2021.

Speaking during a Dáil budget debate on Wednesday, the Tipperary TD said all the anecdotal and statistical evidence showed that the help to buy scheme “acts as an incentive to drive up prices and facilitates the speculation of developers”.

The scheme allows first time buyers to claim a tax rebate of up to 5 per cent of the value of a new home to a limit of €30,000

In his Dáil budget speech Mr O’Brien said his department had been allocated its largest funding allocation of about €5.3 billion.

There will be €110 million for a new affordable purchase shared equity scheme for first-time buyers and a new cost rental model. “We will spend €218 million, an increase from €166 million in budget 2020, to ensure those experiencing homelessness are supported and helped to exit homelessness.”

The Government’s housing strategy has come under a lot of opposition criticism.

But Mr O’Brien said that “contrary to the simplistic and misleading claims of the opposition, building is not a matter of just turning a tap on or off.

“Sinn Féin said it would deliver 20,000 homes next year. Where? How? Planning permission has not been granted for 20,000 homes. Where is the funding for it?”

He said the total extra capital spend the Minister for above existing commitments from the previous government “is a meagre €160 million”.

He claimed it would deliver “fewer than 1,000 genuinely social and genuinely affordable homes above what we would have got otherwise”.

Independent TD Danny Healy-Rae said couples were being thrown off the housing list. He gave the example of two parents with three children and said that if they earn more €33,600, they are removed from the list.

“In many cases, such couples are in receipt of the working family payment, which is what puts them over the threshold.”