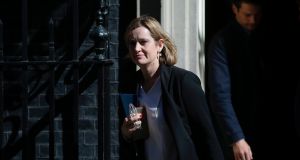 A total of 50 groups have written to home secretary Amber Rudd calling on her to reverse a policy they believe is “beyond basic morality”. Photograph: Daniel Leal-Olivas/AFP/Getty Images 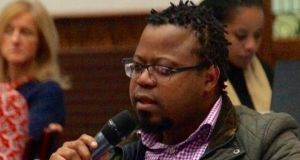 Makhosi Sigabade who lives in Belfast after fleeing Zimbabwe: “After being given a false sense of hope and stability I am being made to relive the nightmares of my past.”

Twenty organisations in Northern Ireland are calling on the British government to end its “harmful refugee policy” after it emerged residency in the UK would be subject to review.

New Home Office guidance means five years after refugee status is granted those in the system will have to take part in “safe return review”, assessing the conditions in their home country at the time. A decision will then be made as to whether they are able to stay in the UK.

A total of 50 organisations working with refugees across Britain and Northern Ireland have written an open letter to home secretary Amber Rudd calling on her to reverse a policy they believe is “beyond basic morality”. In the letter to Ms Rudd campaigners called on the government to grant permanent residency to refugees when their claim is recognised.

Among the groups in Northern Ireland objecting to the review plan is Housing4All, the Northern Ireland Community of Refugees and Asylum Seekers (NICRAS), the Belfast Feminist Network, the South Belfast Foodbank, and Participation & Practice of Rights (PPR), an organisation set up by the late trade union and human rights activist Inez McCormack.

Makhosi Sigabade, a refugee from Zimbabwe living in Belfast, is worried about what the change would mean for him.

“After being given a false sense of hope and stability I am being made to relive the nightmares of my past,” he said. “I am now confronted with a possibility of going back to face the same persecution from which I fled.

“The system meant to protect people seeking sanctuary threatens to expose them to the dangers they flee.”

Housing4All, a Belfast-based group campaigning for housing rights for asylum seekers, called the government’s changes “truly inhuman” and said that it would put refugees “in limbo”.

Colin Harvey, professor of Human Rights at Queen’s University Belfast said “the very idea of human rights is under threat”.

“This is nowhere more evident than in the treatment of refugees and asylum seekers,” he added. “In times such as these we must stand together in support of the global regime of refugee protection and we must ensure that the rights of refugees are not undermined.”

A Westminster all-party parliamentary group on refugees said the uncertainty would have negative effects on refugee’s mental health, their ability to find work, and would “exert specific harm to children in terms of their education and stability”.

Their report also warned that refugees face homelessness and destitution because of a “two-tier” system, which indicates people brought into the UK through resettlement schemes receive more support than those who are given refugee status after arriving as asylum seekers.

The Home Office has declined to comment because of purdah rules around commentary in the lead up to the general election on June 8th.