Archbishop seeks own removal from chair at Holles Street

System of automatically appointing archbishop as chair of board is ‘anachronistic’ 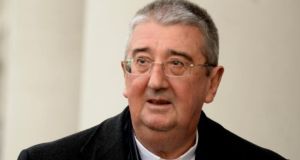 Archbishop of Dublin Diarmuid Martin: requested ministers to change the structures so that he is no longer chair. Photograph: Cyril Byrne

The Catholic Archbishop of Dublin, Diarmuid Martin, considers it is “anachronistic” for holders of his post to be appointed automatically as chair of the board of governors of the National Maternity Hospital (NMH).

A spokeswoman for the archdiocese pointed out that under the NMH Charter Amendment Act of 1936, the Archbishop of Dublin is also designated as chairman of the hospital’s executive committee.

She added: “Archbishop Diarmuid Martin considers this situation anachronistic, and he has requested two ministers for health to change the structures so that he is no longer chair.”

She said Archbishop Martin does not attend or chair board meetings and the deputy chairperson has acted in that role for several years.

Neither Fr McCarthy nor Fr Cunningham could be contacted while Fr McDonagh said he has a policy of not talking to the media due to a bad experience of dealing with a journalist some time ago.

The remaining ex-officio appointees to the NMH board of governors are the hospital’s master, Dr Rhona Mahony, and Dublin Lord Mayor Cllr Brendan Carr.

Two councillors are nominated to the board by Dublin City Council. They are currently Sinn Féin’s Micheál MacDonncha and Claire Byrne of the Green Party.The current nominees of the Minister for Health are Patricia O’Shea and Pamela Fay.

Among the 75 elected members of the board are 35 life members, including former master Dr Peter Boylan.