Deal for half of tenants who faced eviction to house homeless 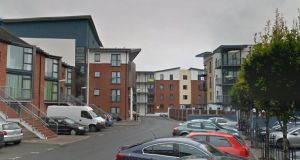 A deal for the Fisherman’s Quay development (above), at Grove Island in Corbally, Limerick was reached last year with the financial backing of Limerick City Council. File photograph: Google Street View

An agreement has been reached to save a number of tenants on the verge of being evicted from an apartment block to make way for homeless people.

Six apartments owned by a pension trust had been due to be sold to the Mid West Simon Community homeless charity. Existing tenants were served with eviction notices to leave by July.

A deal for the Fisherman’s Quay development, at Grove Island in Corbally, Limerick was reached last year with the financial backing of Limerick City Council.

Mid West Simon Community had always believed the units were vacant, but discovered on Monday the tenants were to lose their homes.

In a race to resolve their dilemma, the charity held meetings with several of the tenants at their apartments yesterday and is to follow up with others this week.

They agreed the social housing tenants would remain, while private tenants, believed to be about half of those affected, will be given time and assistance to find alternative, affordable accommodation.

“We have an agreement in principle. Our biggest [concern] was to get a solution; to go and meet people with positive news so that they could get a good night’s sleep,” Mid West Simon Community general manager Jackie Bonfield said last night. “It was very positive.”

Eight tenants had been served with eviction orders on behalf of owners Munster Pensioner Trustees Ltd, with an address in Whitethorns, Castletroy.