IVF, sterilisation and morning-after pill banned by Sisters of Charity 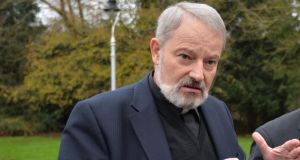 Bishop Kevin Doran: said that he had not been talking about the proposed new National Maternity Hospital at St Vincent’s in Dublin when he spoke to the Sunday Times, but, rather, had spoken “in general terms”. Photograph: Alan Betson

Bishop Kevin Doran may have been speaking “in general terms” last Sunday about healthcare provision in Catholic-run institutions, but he accurately reflected the views of the Sisters of Charity.

Replying to the Sunday Times, the chairman of the Catholic Bishops’ Committee for Bioethics said Catholic hospitals have an obligation to care for all those who need it. However, they have to have “a special responsibility . . . to Catholic teachings about the value of human life and the dignity and the ultimate destiny of the human person.

“Public funding, while it brings with it other legal and moral obligations, does not change that responsibility,” said the Bishop of Elphin, who was in touch with the newspaper from Lourdes.

In an April 2010 document, Religious Sisters of Charity Health Service – Philosophy and Ethical Code – the last such document known to have been issued, the Sisters of Charity laid down clear rules for what should happen in their hospitals.

The morning-after pill is not permitted, while in vitro fertilisation, vasectomies, the sterilisation of women and abortion are always beyond the ethics Pale, too.

The document states: “any means of assisting conception . . . which bypass the normal marital act in which conception occurs are not acceptable in our health care services.”

It continues that “extracorporeal conception as it is attained, for example, in the process of in vitro fertilisation, bypasses the marital act and is not acceptable in our health services.”

The “life and physical integrity of many of the generated embryos are put in grave risk of harm and destruction by the very nature” of the in vitro fertilisation, the code continues.

“In our health care facilities any such procedures in which we do not respect the life and physical integrity of each human being from conception onwards violate the mission of safeguarding life and health,” it says.

It is equally clear about vasectomies and sterilisations: they are not permitted. The “sole immediate objective is to prevent or eliminate fertility” and may not be promoted by Sisters of Charity-owned institutions.

Not surprisingly, the document precludes abortion in all circumstances, including the morning-after pill: “Direct abortion is never permitted since it constitutes the intentional killing of the unborn.”

Later, Bishop Doran told Shannonside Radio that in the Sunday newspaper interview he had not been not talking about the proposed new National Maternity Hospital at St Vincent’s in Dublin, but, rather, had spoken “in general terms”.

However, his remarks came at the end of a week dominated by revelations that the Sisters of Charity would be sole owners of a new €300 million State-funded National Maternity Hospital at the St Vincent’s campus.

He has been caught up in controversies before. Two years ago, during the same-sex referendum debate, he said gay parents are not necessarily parents because “the whole relationship between life-giving and parenthood” has been separated.

The latter refused to say whether Bishop Doran retained his confidence and described it as “an unfortunate phrase”, hoping that “people were not offended by it”.

Six days later, Bishop Doran expressed regret. He was “conscious that whatever the situation, some people were hurt by either what I said or what they thought I had said and I very much regret that”.

In August 2013, speaking as a member of the board of governors at Dublin’s Mater Hospital, he said the hospital “cannot comply” with the Protection of Life During Pregnancy Act, then just passed.

The Mater could not carry out abortions because it went against “its ethos”, he said, adding that he would be “very concerned” if the State saw fit to make it impossible for hospitals to have their own ethos.

A month later, following a meeting of the Mater’s board, it issued a statement which said “the hospital will comply with the law as provided for in the Act”.

The then Fr Doran resigned from the board.

In October 2005, as secretary of the Catholic Bishops’ Bioethics Commission, Fr Doran asserted that pharmaceutical companies behind clinical trials were being “over-prescriptive in their requirements” that women use contraception, which was contrary to Catholic teaching.

Days earlier it was confirmed the Mater hospital had deferred trials of a cancer drug there as female participants would have to use birth control as the drug could affect the unborn. Fr Doran later insisted the decision was not made by any committee of which he was a member.

In a December 2004 article for the conservative Alive magazine, Fr Doran expressed concerns about Catholics taking part in registry office marriages. He said Catholics needed to consider carefully whether their participation in a registry office marriage was “in conflict with the truth. This would be particularly important for someone who is asked to act in a formal capacity as a witness.

“Nobody wants to give offence. But conscience is sometimes compromised to avoid embarrassment or hurt. In the final analysis a person invited to take part has to be responsible for his or her own decision.”