An inglorious end but Glen did the State some service

As the gay rights group is wound up, it leaves a legacy of bringing equality issues to the fore 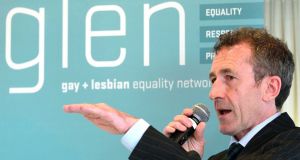 The announcement this week that the Gay and Lesbian Equality Network (Glen) is to be wound up brings an abrupt and inglorious end to the story of an organisation which was instrumental in driving arguably the biggest social, legal and cultural change this generation has seen.

Recent controversies over financial and governance problems caused Glen’s board to announce on Wednesday it was winding up the charity immediately. It’s a rather ignominious final chapter for one of the most successful campaigning groups in the country, and serves as a cautionary tale for any organisation which begins as a voluntary movement but then turns into a more permanent institution.

None of that takes away from Glen’s remarkable success in achieving its stated objective of securing equal rights for LGBTI people in Ireland. When it was first established in 1988, homosexual acts between consenting adults were illegal, there was no protection against discrimination in the workplace or anywhere else, and the idea that same-sex couples should have the right to marry would have been seen as outlandish.

“Glen was set up by all the gay groups that existed at that time,” recalls Kieran Rose, who cofounded the organisation with the late Chris Robson. “Our objectives were reform based on full equality with heterosexuals, along with equality legislation.”

Rose recalls 1988 as “the height of the power of the Right”. In a case taken by David Norris, the Supreme Court had recently upheld the constitutionality of the 19th-century laws which made same-sex consensual sexual activity a criminal offence.

“People described me as a Pollyanna when I said there were hugely powerful progressive traditions in Ireland,” Rose recalls.

When the European Court of Human Rights’ decision in the Norris case forced the State in 1993 to finally decriminalise homosexual acts between consenting adults, Glen argued successfully that any changes to the criminal law should be strictly on the basis of full equality.

That set the template for future successful campaigns which framed LGBTI rights as part of an equality agenda in an alliance with women, Travellers, people with disabilities and ethnic minorities.

Highlighting equality and human rights issues on an ongoing basis, Glen made a number of important submissions and produced a range of research papers, as well as working on health issues. Slowly, institutional and political attitudes towards issues such as civil partnership began to change. That change was reflected in the gradual introduction of parental rights, civil partnership and – finally – marriage equality.

Brian Sheehan, who was executive director of Glen for almost 10 years, says the strategy was to “change the rules, change the policy, change the culture and change the lived experience of what being an LGBTI person is”.

For anyone who thinks the story of LGBTI rights in Ireland reached a triumphant conclusion with the marriage equality referendum, Sheehan points to research that shows a disproportionately high rate of attempted suicides among LGBTI people. “We’ve done most of the laws,” he says. “But a person discovering their sexual orientation or identity still faces real challenges.”

We wanted a situation where being gay would be unremarkable, where a gay man or woman could become president of Ireland

An annual report on political and social developments, along with an indication of what everyday life for LGBTI people is like, places Ireland 15th out of 48 countries European countries , which Sheehan sees as a “good, but could do better” result. There are still issues with schools not implementing guidelines, he says, and pressures remain on people in some professions not to come out. And there are new challenges, such as those faced by an older generation, who may feel they have to go back in the closet as they enter the care system.

So is a new organisation required to carry on Glen’s work? Sheehan praises the Transgender Equality Network Ireland (Teni) and the young people’s support group, BeLongTo for the work they’re doing but he also believes State institutions still need to be both supported and held to account for how their actions impinge on the LGBTI community.

“One of our main aims was to make Glen redundant as soon as possible,” says Rose. “We wanted a situation where being gay would be unremarkable, where a gay man or woman could become president of Ireland. And we can see right at the moment how close we’ve come to that. That’s a landscape transformed in less than 30 years.”

For Sheehan, the lived experience of gay people in Ireland is the key. “It’s very clear from research that there are still very significant challenges facing Irish people who are discovering their sexual orientation or identity,” he says.

“Everyone knows lesbian or gay couples. How many of them hold hands walking down the main street of their town? There’s still work to be done.”