Former Prison Service building to be used for homeless families 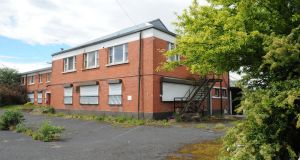 The site where a family hub will be built on Clonard Road in Crumlin. Photograph: Aidan Crawley 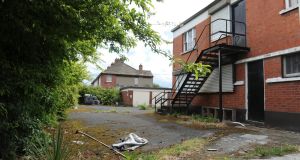 A former Prison Service building beside an industrial estate in Crumlin is to be converted into a “family hub” to accommodate homeless families living in hotels.

Minister for Housing Simon Coveney has set a deadline of July 1st to end the use of commercial hotels for homeless families.

More than 1,000 families are currently in emergency accommodation and 815 of those are living in hotels.

Sufficient alternatives to house these families, such as rapid-build housing, long-term leasing, and other permanent accommodation solutions, will not be in place by July 1st.

To meet the Minister’s deadline, the Dublin Region Homeless Executive has started to move people from hotels into “family hub” accommodation.

The first of these, a former Magdalene laundry in Drumcondra, that had been let for student accommodation, was opened last February.

The executive has also begun to acquire hotels and B&Bs in the city to use as family hubs.

In addition to taking over commercial hotels, the executive is now planning to convert an empty building on Clonard Road in Crumlin, which is owned by the Office of Public Works, into accommodation for 24 families.

The building, which is part of a small industrial estate, had most recently been in use by the Prison Service to provide training for “transitioning probationers” the executive said.

Local councillors said they had not been informed about plans for the facility.

Independent councillor Mannix Flynn said there was a danger that “ghosting” families into the facility without telling the surrounding community would lead to them being “stigmatised”.

“I am disappointed that councillors weren’t informed of this first,” Fianna Fáil councillor Michael Mullooly said. “The area itself is a residential area but there are offices and commercial units on this site, there should have been more information on it .”

Sinn Féin councillor and chair of the council’s housing committee Daithí Doolan said he was “quite aggrieved” to have been kept in the dark by the executive.

“There’s a real danger we are going into a new form of direct provision simply to get Simon Coveney off the hook who said he’d get families out of hotels by the first of July.”

The council’s manager for the area Peter Finnegan said the facility could be used to accommodate homeless families whose children were in local schools. “It’s not perfect, but it’s better than hotels.”

A Dublin Region Homeless Executive spokeswoman said local councillors were informed on Wednesday. “We do not issue communications material until such a time as the contract is signed for the premises and the service provider is in place.”