Taoiseach handled divisive social issues, but only when it was safe to do so 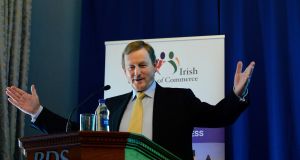 Taoiseach Enda Kenny: On both marriage equality and the abortion issue he saw what, at the very least, had to be done and focused on taking no political risks to make them politically possible. Photograph: Cyril Byrne

Welcoming the emphatic ‘Yes’ vote in the marriage equality referendum, on May 23rd, 2015, Taoiseach Enda Kenny was clearly delighted with, even proud of, the result.

“With today’s ‘Yes’ vote we have disclosed who we are – a generous, compassionate, bold and joyful people. The referendum was about inclusiveness and equality, about love and commitment being enshrined in the Constitution. The people have spoken. The people have said, ‘Yes’. Ireland, thank you.”

He and his Government had proposed the referendum, campaigned for a ‘Yes’ vote and delivered a historic result, making Ireland the first country in the world to have approved gay marriage through a popular vote.

It was also to Kenny and his Government we must look for having delivered the 2013 Protection of Life During Pregnancy Act (PLDP Act), 21 years after the Supreme Court ruling in the ‘X’ case that abortion was legal when there was a real and substantial risk to a mother’s life.

Though derided by many as so restrictive as to leave abortion inaccessible to the vast majority of women seeking it, the significance of the Act should not be underestimated, setting out as it does for the first time in the State’s history not only whether abortion was legal, but the circumstances in which it was.

Kenny’s supporters will point to these as proof of his socially progressive leadership.

In truth, however, Kenny has been a greater political pragmatist than social leader. On both marriage equality and the abortion issue he saw what, at the very least, had to be done and focused on taking no political risks to make them politically possible.

Marriage equality, it has been argued, did not require a referendum and could have been legislated for as far back as 2007 (when Fianna Fáil was in government) after Katherine Zappone and Ann Louise Gilligan lost their case to have their Canadian marriage recognised for tax purposes. Significantly in her judgment in December 2006, Ms Justice Elizabeth Dunne did not say Constitutional change was needed for same-sex marriage to be recognised, but legislation.

Civil partnership was legislated for in 2010 by Fianna Fáil, but it took a mass mobilisation of not only “ordinary people” but big business and the political establishment – and Fine Gael’s coalition partner the Labour Party – to convince Kenny to back a referendum.

And there were events. The death of Savita Halappanavar (31) on October 28th, 2012 in Galway University Hospital, forced action on the abortion issue.

She died of sepsis a week after she had been admitted to hospital with back pain, was found to be miscarrying her 17-week pregnancy and was refused an abortion because the foetal heartbeat was still present.

The Constitutional and legal imperatives to legislate for X though already there – in the 1992 Supreme Court ruling, and the 2010 European Court of Human Rights ruling against Ireland in the A,B and C cases – could probably be ignored if too politically toxic.

The domestic and international horror at Ms Halappanavar’s death, however, meant doing nothing was no longer an option.

Shrewdly, Kenny did not allow a free vote in Fine Gael when the PLDP Act was voted on in the Dáil on July 11th, 2013. It passed, by 127 votes to 13, but Kenny lost five parliamentarians, including Minister of State Lucinda Creighton.

The issue did not go away. A vibrant campaign for a referendum to repeal the eighth amendment to the Constitution, which protects the “equal right to life” of the mother and unborn, has grown since.

Balancing the misgivings of conservative supporters with a growing momentum towards liberalisation of abortion regime, his Government promised a Citizens’ Assembly to consider the next steps. Dismissed by many as a “can-kicking” exercise – which may well have been its intended purpose – to observers’ surprise the 99-member assembly reported back last month recommending a liberal abortion regime. A referendum is likely next year.

Though the received wisdom has been that abortion and LGBT rights are among the most divisive social issues facing our political class, the results from the marriage referendum and the citizens’ assembly suggest otherwise.

To some, Kenny’s legacy on these issues will be that he put aside his own feelings and deftly dealt with them. To others, he moved only when it was safe to, and then only as little as possible.