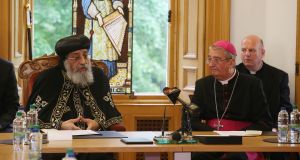 The library of Archbishop’s House in Drumcondra will have played host to innumerable grand and colourful occasions - but few will have matched that which occurred on Thursday.

Leading an entourage of no fewer than 20 Coptic Christian monks, priests and bishops, His Holiness Pope Tawadros II of Alexandria cut a striking figure as he led them in to meet Archbishop Diarmuid Martin.

The first visit of a Coptic Pope to Ireland to bless and dedicate St Maximus and St Domadios Coptic Orthodox Church in Drumcondra, the former St Alphonsus Church, is a joyous moment for their church here.

“We’ll be neighbours and hopefully good neighbours,” said Dr Martin, adding it is a great joy that the Coptic Christians had found a permanent home and that they would “enrich all in common communion with God through love”.

Speaking in the presence of the Egyptian ambassador to Ireland, Soha Gendi, Archbishop Martin pointedly referred to the four-year trial in Egypt of Irish citizen Ibrahim Halawa.

“We share the humanitarian concern of his family, who are well known to us,” Dr Martin said - a view echoed later by President Michael D Higgins after he met with Pope Tawadros.

“The leaders emphasised the crucial value of human rights, including the freedom of religion and the rights of prisoners,” said a spokesman for the President later.

Mr Halawa’s trial has recently been delayed for the 23rd time. “President Higgins made particular reference to the pressing case of Irish citizen Ibrahim Halawa, which he described as needing an urgent resolution,” the spokesman continued.

Mr Halawa, the son of a prominent Muslim cleric in Dublin, Sheikh Hussein Halawa, was imprisoned after being detained in a mosque near Ramses Square in Cairo as the Muslim Brotherhood protested over the removal of elected president Mohamed Morsi in August 2013.

Speaking in a soft, gentle voice and smiling easily, Pope Tawadros II (64) said his church was blessed in Egypt by having some 50 monasteries and blessed also with its martyrs, but there were difficulties, too.

The Coptic Church is part of the oriental Orthodox branch of Christianity. In recent years the church in Egypt has borne the brunt of major attacks, including bombings that killed scores last month, and discrimination.

Despite this, the message from Pope Tawadros, the Copts’ 118th pope, was one of love. Holding up a large white cross, he said that, for him, the stem of the cross represented love, while either side of the crosspiece represented study and dialogue and the top section represented praying together.

And pray they did: among them The Lord’s Prayer, psalms 50 and 67, Matthew 5, the Blessing of St Columba and then, at the invitation of Dr Martin, Pope Tawadros led the final blessing.

His Holiness, with tinted spectacles and a salt-and-pepper beard, wore a tightly wrapped jet black satin turban, as did his bishops – Bishop Pavly, the general bishop, Bishop Antony, bishop of Ireland, Scotland and northeast England, Bishop Makar, Bishop of Sharkia and the Tenth of Ramadan, and Bishop Angaelos, general bishop in the UK.

The priests wore beret-like headgear, while the monks donned their traditional scarf-cum-balaclava headwear - each embroidered in silver with six crosses on either side representing the 12 apostles, a lone cross of Christ on the back and, running front to back across the top of the cover, elaborate zip-like stitching – a throwback to a tussle between St Anthony and the Devil which also involved, explained a friendly monk, a buzzard and an angel.

The entire delegation wore jet black robes, some embroidered with silver thread but none quite so striking as that of Pope Tawadros.

He remarked for all present, but probably for none more than Egyptian ambassador Soha Gendi, sitting just feet from him, that many in Ireland, including his church, shared a humanitarian concern for Ibrahim Halawa, whose family “are well known to us”.

The Copts number perhaps 500 in Ireland, with churches in Dublin, Cahir, Galway and Bray. While there are about one million Copts outside of Egypt, that country is home to some 14 million members of the church - a minority among Egypt’s 92 million Muslims.

After a quick burst of competitive icon swapping – from Archbishop to Pope, the ascent of the Holy Spirit, made for the Eucharistic Congress of 1932; from Pope to Archbishop, the flight of the Holy Family from Judea to Egypt, a matter close to every Copt’s heart – and it was off to the former St Alphonsus Church, and thence to the Phoenix Park.

“Love never fails,” Pope Tawadros wrote in the Áras visitors’ book before he and Michael D repaired for a half hour of private chat.