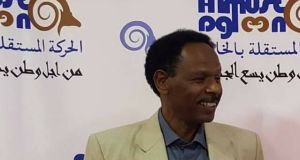 Amnesty International have issued an appeal for an Irish-Sudanese citizen who has been detained without charge in Sudan.

Nabil Mohamed El-Niwari, a Sudanese political activist and member of the oppositionparty Sudan Congress, was arrested by the Sudanese National Intelligence and Security Services (NISS) in Khartoum on September 5th.

Nabil Mohamed El-Niwari, a 57-year-old electrical engineer, and father of three, is a Sudanese –Irish national.

He is currently being held without charge at the NISS detention centre at Kober Prison in Khartoum North.

A spokesman for the Department of Foreign Affairs said it is aware of the case and is providing consular assistance.

Amnesty International said he has been denied access to a lawyer and is at risk of torture and other ill-treatment while in detention.

A family member told Amnesty International that Mr El-Niwari was arrested and detained for 10 hours on 29 August by the NISS.

They questioned him about his activities as a member of the Sudan Congress Party.

Mr EL-Nirwari was arrested on August 29th after he had attended the last session of the trial against Asim Omar Hassan, a 23 year old first-year student at the University of Khartoum, who is also a member of the Sudan Congress party. Asim Omar Hassan was on trial accused of killing a police officer in May 2016. The court found Asim Omar Hassan guilty of murder and he risks the death penalty.

Asim Omar Hassan is awaiting a final decision on his sentence on September 24th.