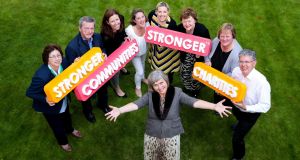 Charity employees are having to “justify themselves and their work even to friends and family”, an event in Dublin heard on Tuesday.

Representatives of several charities attending the announcement of a new awards competition for charities said morale had been hit both by the recession and by a slew of scandals in recent years.

Deirdre Garvey, chief executive of the Wheel – an umbrella representative organisation of over 1,300 voluntary and charitable groups – said it was understandable the public felt “betrayed and let down” by irregularities that had emerged in a handful of charities in the past four years.

“The sector in Ireland has been through 10 tough years since the economic recession and social crisis began in 2008, and the negative impact of...stories in the media from 2013 greatly added to the challenges facing charities,” said Ms Garvey.

Emer Mullins, director of public engagement with Oxfam Ireland, said she had heard colleagues in the sector say they had had to “justify themselves even to friends and family” and “explain what they do” following recent scandals.

She said it was time charities, many of them providing essential services, promoted the impact of the work they did rather than allowing much of the focus to be on costs.

Ms Garvey said it was now time for the sector to “get out from the undergrowth”, and proudly tell of the “important work” it did. They needed to “take a central place in the national debate on the kind of society we want”.

“The fear of attracting negative attention has amplified the lack of understanding of the role played by charities and has had a demoralising effect...We aim to address this with our Charity Impact Awards. We must take pride in what we do, and show the people why we do it and why it’s important.”

The awards under a number of categories, for which anyone can nominate a charity or individuals in the sector, will be shortlisted by the Wheel and then voted on by the public. Winners will be announced on December 13th.

Ms Garvey said the regulatory environment had transformed in the last five years with a charity regulator and over 1,600 charities in the process of bringing their governance structures into compliance with the regulator’s requirements.

“It is now widely appreciated that all of the funds under the control of charity trustees are public funds, and that the public has a right to maximum transparency and accountability.”