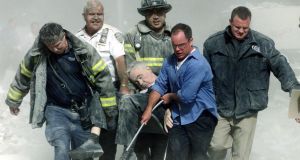 Moves have begun in the US to have Fr Mychal Judge, son of Leitrim emigrants and the first official victim of the 9/11 attacks in New York, canonised.

Chaplain to the city’s fire department, the 68-year-old Franciscan priest was killed when the South Tower collapsed, sending debris through the lobby of the North Tower - where he was giving the last rites to a firefighter.

The New Ways Ministry in New York, set up to build links between the LGBT community and the Catholic Church, has called for testimonials on Fr Judge from those who knew him but, in particular, for “any information regarding a possible miracle attributed to Fr Judge’s intercession”.

It has pointed out that under a directive of Pope Francis last July, “a new possible pathway to sainthood” has been established as “the heroic giving of one’s life for others”.

The Pope’s motu propio of July 11th last,titled Maiorem hac dilectionem, said this additional pathway to canonisation would involve “free and willing offer of one’s life and a heroic acceptance, out of love, of a certain and early death; the heroic act of charity and the premature death are connected”.

“Evidence of having lived out the Christian virtues - at least in an ordinary, and not necessarily heroic, way - before having offered one’s life to others and until one’s death.

“Evidence of a reputation for holiness, at least after death” and “a miracle attributed to the candidate’s intercession is needed for beatification”.

New Ways Ministry also points out that Fr Judge, who was gay, “was also known as an unofficial chaplain in the gay community, providing pastoral care and support wherever and whenever he could. He ministered, selflessly, too, with HIV/Aids patients and with people suffering from addictions.”

Among those who think highly of Fr Judge is Cardinal Archbishop of New York, Timothy Dolan. At his 2009 installation in St Patrick’s Cathedral, New York, he said: “The Risen Christ is alive in her consecrated religious, women and men, in whom (St) Elizabeth Ann Seton, (St) Frances Xavier Cabrini, and Michael (sic) Judge find most worthy heirs, as you continue to give the Word flesh in your simplicity of life, charity, and obedience.”

On September 11th, 2005, a peace garden was dedicated to the memory of Fr Judge at land previously owned by his family in Keshcarrigan, Co Leitrim. The priest was a frequent visitor there and made his last trip in 2000, the year before he died.