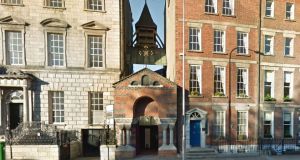 There are no Catholic-run second level schools in Co Leitrim or West Cork and this is part of a trend, a conference in Dublin has been told. Meanwhile 42 Catholic primary schools, all in south Dublin, were oversubscribed this yearand 17 did not enroll a total of 56 non-Catholic children. One school in north Co Dublin had no place for 107 children through lack of accommodation..

Jonathan Tiernan, director of Alliance for Catholic Education - Ireland, described Catholic schools as “a treasure” and said that “the next 10 years would be a defining period for Catholic schools here (Ireland)”. He reminded the attendance “the definition for not changing, is ‘dead’.”

John Boyne, President of the Irish National Teachers Organisation (INTO), said “religous education has been part of the landscape in Irish education for a very, very long time” and it should be borne in mind that in the 2016 census over 90 per of respondents said they “had religion”.

The INTO promoted inclusivity in schools but “the first priority is to look after the children, no matter their faith.” But “the readiness of teachers to embrace Catholic education is not as it used to be”, and he believed “we have enough Catholic schools. I don’t see the need for more.”

However, as schools under other patronage “flourish” it was “not necessary that all schools in Ireland should lose their denominational character,” he said.

Last year’s census, which showed that over 78 per cent of Irish people claimed to be Catholic, demonstrated Ireland was “still a predominantly Catholic country,” she said. It was the case that, when it came to schools “parents are still choosing the Catholic option where there is a choice.”

However there was “a need to respond to pluralism. We cannot rest on being the majority,” she said.

There was “a need to retain Catholic second level schools as an option for parents”, she said, but there were none in Leitrim and many parts of Cork.” She added “I can see Catholic secondary schools disappearing from the pitch.”

Dr Anne Looney, executive Dean of DCU’s Institute of Education, felt there was “a need for more talk about education and less about control.” It was also the case that in broader debate, such as on Leaving Certificate and the points system “the Catholic voice is often missing.”

Seamus Mulconry, general secretary of the Catholic Primary School Management Association (CPSMA), said that where migrant children were concerned Catholic schools played “a massive role in integration.” He expressed “total surprise at commentary that Catholic schools are not inclusive. The reality is very different.”

In discussion Dr Looney said she believed “the term ‘baptism barrier’ is extremely offensive for Catholics and shouldn’t be used.” Mr Mulconry said that in all of last year the CPSMA received few queries about the need for baptismal certificates when it came to school admissions.