Asylum seekers facing deportation given a month to leave hostels 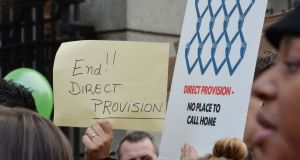 A 2014 protest against the direct provision system. Photograph: Alan Betson

Letters sent to asylum seekers who are on deportation orders telling them they must leave direct provision by a certain date mark a “catastrophic shift” in the Government’s refugee policy, the Irish Immigrant Support Centre has said.

A number of single, male asylum seekers received letters from the Reception and Integration Agency (RIA) of the Department of Justice this month informing them that they must vacate the hostels where they have lived while awaiting on outcome on their deportation orders.

The letters, which were dated September 5th and September 18th 2017, informed the cohort of asylum seekers that the RIA had “no role in the provision of accommodation to persons once a decision has been made on their application”. The recipients of the letters were given one month to leave their accommodation.

Nasc, the Irish Immigrant Support Centre, accused the Department of “ actively seeking to make asylum seekers homeless and destitute” and called the letters “cruel and inhumane”.

“It has come to Nasc’s attention this week that RIA is issuing letters to certain single, male asylum seekers who are on deportation orders, that they must vacate direct provision by a certain date,” said Nasc’s legal services manager Fiona Hurley.

“Several of those who have presented to Nasc with this letter in the last several days have been on deportation orders for several years, which have not been effected by the State, often from countries that Ireland could not deport to, such as Palestine and Somalia. ”

The support service also voiced concern that the shift in RIA policy could soon affect families with children.

“Up until now, RIA has housed asylum seekers on deportation orders - some for upwards of seven or more years. This letter shows a catastrophic shift in policy, which will actively make those on deportation orders that have not been effected by the State at severe risk of homelessness and destitution.”

In 2010, the RIA wrote in its Value for Money & Policy Review, that the body “accommodates persons at every stage of the asylum process and beyond that to a point of resolution of the case”. It said the RIA would “accommodate persons who have effectively failed the asylum process” and that this remit would only cease when a deportation or other removal was implemented.

The letters sent out this month also noted that the RIA had “a very limited supply of accommodation to cater for new applications who are entering the protection process”.

According to the latest RIA data from the end of August, 2017, there are 464 spare places available in direct provision centres.

Asylum seekers, including those on deportation orders, have no entitlements to social welfare and cannot access homelessness services. Once a person vacates the direct provision system they are no longer entitled to the €21.60 weekly allowance.

A person or family are issued with a deportation order after their application for asylum, and subsequent appeals, are rejected. Many people have spent years waiting for a decision on their case.

“Across the board, people who are pushed into homelessness have difficulties accessing services,” said Ms Hurley. “Now imagine a scenario where you have a person without a residency permission, without entitlement to supports, without even any identity documents, who cannot return to their country of origin, on the streets because the State has decided it is no longer willing to support them.

“Whether they like it or not, the Department has a duty of care, to provide housing to people who have claimed asylum and who seek accommodation from it until such time as those people are either granted asylum or subsidiary protection, granted leave to remain or leave the country voluntarily or by deportation. It is one of the most inhumane actions we have ever seen come out of the Department of Justice.”