A year after Apollo House has anything really changed? 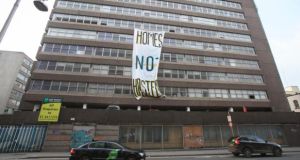 This day last year a group of about 100 individuals took over the empty Apollo House  in Dublin’s city centre and repurposed it to accommodate homeless people. The occupation was first reported by Kitty Holland for The Irish Times early on Friday December 16th.

The campaign, which was made up of housing activists, artists and trade-unionists, named itself Home Sweet Home.

Its aim was to provide shelter for rough sleepers in this Nama-controlled empty office building on Poolbeg Street, while simultaneously highlighting the homelessness crisis.

Fast forward one year and Apollo House is due to be demolished, the number of rough-sleepers has risen and several homeless people have died on the streets since.

Brendan Ogle, a spokesperson for Home Sweet Home, told The Irish Times that in terms of “inspiring an ongoing or permanent solution to the housing emergency. Apollo House has been a complete and utter failure - but in that regard only”.

What circumstances led to this very public demonstration? What, if anything, did it achieve? Where is the money that the group raised?

In the first of our new series, One Year On, we speak to the people involved and see what has happened in the year since.

What led to it?

The intervention came as the number of rough sleepers on Dublin’s streets had increased by 50 per cent since winter 2015.

There were 142 people sleeping rough in the capital on the night of the official “winter rough sleeper count” on November 22nd 2016.

Houses had become harder to buy after the State introduced strict mortgage lending rules in an effort to avoid another property price crash.

This was compounded by the rising cost of rents nationally, which were higher in 2016 than at their previous height at the top of the boom in 2006.

The human cost of this perfect storm in housing was clear for all to see - but what could be done about it in time for Christmas?

Speaking to The Irish Times one year on, Brendan Ogle explains what the campaign wanted to achieve.

“The first thing I wanted to do when we entered Apollo House was to raise attention to what was then a housing and homelessness emergency.”

“We wanted to draw attention to that emergency and in that regard Apollo House was a stunning success.

“At a human level we wanted to provide somewhere safe, warm and comfortable for people who would have otherwise spent Christmas on the street.

“We did that, thanks to the generosity of the public and the hundreds of volunteers who gave up their Christmas.

“We did that, and nobody died on the streets of Dublin last Christmas or New Year.

“The third thing we wanted to do, building on those two objectives, was to play some role to inspire an ongoing or permanent solution to the housing emergency.

“In that regard Apollo House was has been a complete and utter failure - in that respect only.

“There are more homeless people now than there was this time last year,” Ogle says.

Their solution at the time, however, had been very clear-cut and easy to imagine.

The campaign involved a number of high-profile artists like Glen Hansard, Jim Sheridan and Hozier.

There was an increasing number of blue sleeping bags seen strewn around the city’s streets by the rough sleepers who were enduring bitterly cold winter weather.

Christmas was around the corner and there seemed to be no imminent Government solution to the crisis.

This was a campaign that would pull at the nation’s heartstrings.

“We are going to go in, turn on the electricity, turn on the water, turn on the heating and gather up as many homeless people as need a roof over their head. This has been very well planned and the building is safe,” Ogle told The Irish Times on December 16th, 2016.

He was joined outside the building that day by high-profile artists such as director Jim Sheridan and singers Hozier, Christy Moore, Liam O Maonlaí, Glen Hansard, Damien Dempsey, Conor O’Brien of Villagers and members of the band Kodaline.

On the same day a number of Anti-Austerity Alliance-People Before Profit TDs - including Richard Boyd Barrett and Paul Murphy - wore Home Sweet Home t-shirts in the Dáil in support of the demonstration.

The housing minister of the time, Simon Coveney, told the Dáil that “to occupy a building and try and put supports together in an ad hoc way is not the way to deal with this”.

He pledged extra emergency beds in shelters across the city.

Former minister for children Katherine Zappone said homeless families should be allowed to stay in Apollo House over Christmas.

Meanwhile, showers and kitchen equipment were installed and catering supplies, food and blankets were donated as the numbers staying began to rise to over 30 people.

One man who was staying in Apollo House, Frank, told Irish Times Social Affairs correspondent Kitty Holland: “It is beautiful here… If I could I would stay forever.”

Another resident, Ken, who was staying with his wife Rachel, said “I feel like a man again”.

On December 20th Glen Hansard, Hozier, Liam Ó Maonlaí, Kodaline and Aslan’s Christy Dignam played a free concert outside the building to a crowd of up to 1,000 people.

On that same day receivers appointed to Apollo House launched a High Court action aimed at regaining possession of the property, pointing out health and safety issues.

The judge ruled that those occupying the building must leave by January 11th. The building was fully vacated on Thursday, January 12th.

The remaining residents who had left the building were provided with housing or temporary hotel accommodation paid for by the Home Sweet Home campaign funds.

“This campaign has only just begun. It’s a very emotional day for everybody that’s been in here for the last few weeks,” Ogle said as the building was vacated.

Where did the money go?

Over the course of the occupation some €189,000 was raised through cash and cheque donations as well as a Go Fund Me page.

A significant proportion of this went on professional security services, as well as heating and food.

Some €4,715 of this went on “operating costs” including high-vis vests, ID tags, stationery, printers and wifi dongles, and €179 on waste collection.

According to Dave Gibney, a spokesperson for Home Sweet Home, some €77,000 was given to various grassroots groups which help homeless people.

These groups were invited to apply for up to €5,000 of the money and there were 37 successful applicants.

Mr Gibney told The Irish Times that the groups were from across the country and not just Dublin, they do not receive government funding and ranged from women’s refuges to a pizza club for homeless people.

The remaining €53,000 was spent on “a transitional house rented out for the people who were in Apollo House...the invoices which hadn’t been paid up to that point and storage for all the stuff that the court ordered had to be taken out,” Mr Gibney said.

Updated accounts are due to be published by Home Sweet Home in December.

What has happened since?

When Leo Varadkar took over as Taoiseach in 2017 he said the housing crisis would not be solved within the lifetime of this Government, a position echoed by Eoghan Murphy who succeeded Coveney as Minister for Housing during Varadkar’s Cabinet reshuffle.

In September of this year, Murphy announced that 200 additional emergency beds for homeless people would be in place in Dublin by December and that an additional €10 million would be allocated for family hubs for homeless families who need emergency accommodation.

“I know it is not exhaustive, I know people will ask is it enough, it is not enough. More will come,” Murphy said.

Meanwhile, at least eight people have died while sleeping rough across the country since late August 2017, including two men in Dublin and one woman in Cork over the last number of weeks.

One of those who died in 2017 was Apollo House resident and chef  Shane “Jack” Watson, who was found dead on Suffolk Street in Dublin on August 31st. It soon emerged Watson was convicted by a court in the Australia state of Victoria under the name “Jack Steele” in 2008 for the indecent assault of two girls under the age of 16. The campaign was shocked at learning of Watson's past and campaigners who knew him expressed horror at learning about the crimes.

This news led to the cancellation of a vigil for homeless people which had been planned by Home Sweet Home outside Apollo House that week.

The latest rough sleeper count in Dublin found 184 people to be sleeping rough on the night of November 7th, 2017.

This is the highest number on record since the count began in 2007 and it is double the winter 2015 figure.

Meanwhile, the demolition of Apollo House ran into delays due to a High court bid by a neighbouring pub, The Long Stone.

Permission for the demolition of Apollo House and Hawkins House and a complete site redevelopment with a €50 million office scheme was granted earlier this year.