Brendan Ogle: Why we have occupied Apollo House 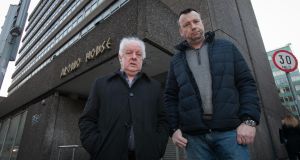 It’s been just over two years since Jonathan Corrie, a homeless man, was found dead yards from Dáil Éireann as our elected parliamentarians went to work.

Jonathan’s 16-year-old son Nathan told The Irish Times after his death that his father had left Carlow because he did not want his family to see him in difficulty. Jonathan was 43 years old. Young yes, but the life expectancy for a homeless man is 44, and for a woman just 38.

Sixteen people died on our streets between 2011 and 2014 and the graph has been rising since. You might remember Jonathan’s name but will you remember the names of the other 15? The people dying now hardly merit a footnote on the national daily news stories about ‘recovery’ ‘growth’; so much bombast and bluster, and alongside it the reality of so much unnecessary death and suffering.

It is to our national shame that neither Jonathan’s death, nor that of any of the others before or since, has shocked us into addressing the root causes of homelessness. The situation has gotten exponentially worse: homelessness has risen 40 per cent in the last year alone. We are a nation that, in 2016, cherishes none of its children equally.

I got a phone call from a friend in the music industry recently who is also a Trojan community activist in his native Ballymun. Dean Scurry, who I first met through the Right2Water campaign, told me how many of Ireland’s artists and poets, actors and film directors wanted to do something to address this human crisis. I knew one or two of them a little. Glen Hansard had done me the honour of launching a book I wrote recently about the water campaign and our dreadful, policy driven, inequality. Damien Dempsey has performed at Right2Water events and people like John Connors and Terry McMahon feel the pain of our broken nation deeply.

Others too were on board: ‘Christy’, Jim Sheridan, Kodaline, Saoirse Ronan, the list went on. Dean had an idea. Could a citizen-led intervention take homeless people off the streets until the Government got around to housing them? The artists would be open to supporting such a move if it had as its objective the creation of a home for people forced to live on our streets. It was the lads from Kodaline who stated “we have homes without people, and people without homes” when confronted with the startling statistic that while we have 6,500 people officially homeless including 2,400 children, that the census shows we have a whopping 193,000 empty homes in Ireland, excluding holiday homes.

And then there’s Nama. The bad bank that was used to socialise private debt and bequeath to us buildings all over our landscape that lie fallow while people get soaked, freeze, go hungry and even die below. Did I think we could get access to a Nama property? ‘We’ owned it after all. It took about a week to find a property we could access with some assistance and eventually Apollo House, a former social welfare office now closed down, came into our possession.

This has been tried before. The wonderful Irish Housing Network and many other groups have been trying to provide support for our homeless people for a long time. But never in a Nama property and never with such support. So a loose coalition was formed. We all had different tasks, but the same motivation. Could we arrive at a situation where nobody, at least in Dublin, is forced to be without a roof and ‘home’ for this Christmas and beyond?

There are wonderful videos involving Jim Sheridan, Glen and many others and I hope, we all hope, that these efforts may force us all to look inwards and stop this madness. And it is madness that can be easily stopped. In recent years governments have given more than €2.7 billion in tax cuts disproportionately benefiting the wealthiest and corporations. Did you get any of that? Did it change your life? No, me neither. But it could have built over 10,000 homes each year. It could have changed the life of every homeless person, of every homeless child, and ultimately cleared social housing waiting lists.

Homelessness is a result of poor, or cruel, political policy decisions. I prefer to think of them as just poor. Otherwise, what have we become as a society?

Ultimately homelessness and its causes will only be resolved by a movement in policy towards housing that is based on citizenship as much as profit, that puts human decency above uncaring ideology.

I do not know how ‘Home Sweet Home’ will work out, but whatever differences we all have, can we please resolve to end this cruelty? The gardaí who came to Apollo House last night praised the volunteers and confirmed the event as peaceful and well organised. They toured the building checking the welfare of the homeless people who were sleeping in private rooms on new mattresses for the first time in a long time. We told them that Apollo House was a ‘dry house’ for genuinely homeless people, well-resourced and taken care of. So please help in any way you can.

Tonight there are people sleeping in a safe and secure building with heating and electricity, and if it wasn’t for this intervention of artists and citizens they would be in doorways and alleyways. I have no doubt this intervention, with your support, can save lives. To find out more about how you can help please go to homesweethome.irish