Death of homeless woman in Cork not being treated as suspicious 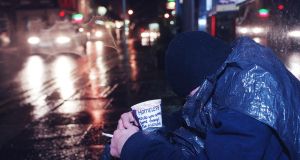 The homeless woman, who was in her mid-40s, has been named locally as Kathleen O’Sullivan. File photograph: Bryan O’Brien

Gardaí investigating the discovery of the body of a homeless woman in Cork city centre on Wednesday morning say they are not treating her death as suspicious .

The body was discovered by two gardaí on patrol near the Simon Community shelter on Anderson’s Quay at about 11am on Wednesday.

The woman, who was in her mid-40s, has been named locally as Kathleen O’Sullivan.

The officers found her under a heap of blankets in a doorway at the back of the Clayton Hotel on Lower Oliver Plunkett Street, where homeless people often sleep rough because of its proximity to the Simon shelter.

The emergency services were called but Ms O’Sullivan was pronounced dead at the scene.

Her body was removed to Cork University Hospital where a postmortem is due to be held on Thursday.

Gardaí checked CCTV footage covering the area and established that Ms O’Sullivan was alive earlier on Tuesday night. A Garda technical expert also carried out a forensic examination of the scene but gardaí have found nothing to suggest any foul play.

Originally from Togher on Cork’s southside, Ms O’Sullivan, who has at least one adult child, had lived more recently at Comeragh Park in the Glen on the city’s northside. She was known to homeless services in Cork for the past number of years.

Sleeping in a tent

Ms O’Sullivan is the second woman sleeping rough in Cork to die in the past three months. A 30-year-old woman was found dead in a tent in Gillabbey Park in September .

Two rough sleepers were found dead in Dublin last week. A man in his late 50s who was sleeping in a tent in Ranelagh was on a “priority” list to be housed but could not be due to a lack of one-bed dwellings. The second man, a Lithuanian national in his late 30s, died outside the Four Courts where he had been sleeping rough.

A spokesman for Cork Simon Community said the problem of rough sleeping in the city has increased in recent months. He said more people were availing of a 15-bed emergency winter night shelter which Cork Simon opened on November 1st and which will operate until March 31st.

“It has to be said from an emergency response point of view that both the Government and Cork City Council have responded very positively in that there are resources going into extra emergency beds so the response there is very welcome,” said the spokesman.

“But what we are concerned about is a permanent response – it can’t only be an emergency response and what we need to keep the focus on is making sure there is housing so once housed, people are much better placed to address all the issues that pushed them into homelessness.”