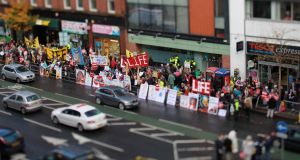 Police stand at the entrance of the Marie Stopes clinic as anti-abortion protestors hold up placards outside the Belfast clinic in October 2012. Photograph: Peter Muhly/AFP/Getty Images

During its five years of life, the Marie Stopes clinic in Belfast dealt with thousands of women. The oldest was 52; the youngest was 13 who had become pregnant after she was raped by a relative.

When it opened in 2012, the clinic faced protests from hundreds of anti-abortion demonstrators outside its Great Victoria Street offices. Protests continued during the years that followed, remembers Dawn Purvis, who led the clinic for three years after she had lost her seat in the Stormont Assembly, where she served for a time as the leader of the Progressive Unionist Party.

No one was ever turned away. Now, the office is closing following the British government’s move earlier this year – one forced on it by British Labour Party MP Stella Creasy to fund abortions for women from Northern Ireland in England, even though Marie Stopes itself argues that such abortions should be available in Belfast.

Given the change to the legislation, the numbers contacting the private Belfast clinic have dropped dramatically, making its presence in the city unsustainable, so the decision was taken, after five challenging years, to shut the non-profit making clinic and focus resources to help Northern Irish women access funded treatment in England.

On Marie Stopes’s opening day in 2012, hundreds of anti-abortion activists gathered outside the Great Victoria Street building in central Belfast, and protests continued during the hours it was open, on two days per week, and beyond.

‘No one’ turned away

Its closure has been welcomed. “Fabulous news. Marie Stopes have closed their Belfast Office. Precious life have held vigils etc outside and their work has borne fruit. Could it also have anything to do with the Coastal Rosary held last Sunday? Deo Gratias,” commented one anti-abortion campaigner this week.

Ms Purvis helped set up the Belfast clinic and was its director from 2012 to 2015.

If women could not afford to pay the clinic then women’s groups, charities and other funding sources were found. “No one was ever turned away, there was always help available,” says Ms Purvis.

This year, the Belfast clinic will deal with more than 700 women. The numbers, however, coming to its doors dwindled in the weeks since the change in Westminster legislation.

Most of those who came were poor, or with the freest of choices and means to arrange their own abortions.

Many were in unhealthy relationships, with injuries from abusive partners, and every year around January and February there was a spike in the numbers arriving after being raped and abused by controlling partners over the Christmas period.

“From day one the protesters were there and the tactic was to harass and intimidate and publicly shame the women who were coming to use services, but similarly to intimidate staff on a daily basis,” Ms Purvis said.

“When you support women and young women and girls in very difficult circumstances it can’t but help affect you, particularly knowing what they have gone through and suffered, to witness them being shouted at and chased down the street was horrific.

“The 13-year-old, while she was with us, disclosed she was being sexually abused by a relative.”

Women who ask for abortions “cannot be stereotyped”, she argued. Research by Marie Stopes throughout the UK indicates that most women who come to it for abortions are in relationships, have children and had been using contraceptives.

“This society has moved on from the 1960s and 1970s talking about girls getting themselves into trouble,” said Ms Purvis.

Women from the Republic represented up to 40 per cent of the clients arriving at the clinic while Ms Purvis was overseeing it, with the majority travelling from Border counties and Dublin, but over the years numbers fell.

“Many women from the Republic go direct to England, Marie Stopes and BPAS [the British Pregnancy Advisory Service] in England discount the cost of treatment for women travelling from the Republic.

“In many respects coming to Belfast was more expensive for them.”

Ms Purvis believes there has to be a change in the law across Ireland to offer all women choice and notes women in abusive relationships and those living in Northern Ireland with visa difficulties are in desperate need of help.

On anti-abortion groups in Northern Ireland claiming the Marie Stopes Belfast closure as a victory, Ms Purvis said: “They would say that, wouldn’t they?”

“The decision at Westminster came about because of a lot of things but that included Marie Stopes opening in Belfast, pushing the issue up the agenda along with other campaigners and activists across the island,” she said.

“We continue to export the problem and it’s really only a local solution that will help women the way they should be helped in terms of this healthcare service you can access anywhere else in the United Kingdom except in Belfast.”

“The Department of Health also really needs to issue guidance to GPs on referral pathways for women who come to them,” she added.

Women’s decisions to share their stories have helped to change minds about abortions, she argues.

Now that the Belfast clinic is closing, Northern Irish women and those from the Border counties on the Republic side can still call the Marie Stopes helpline. Otherwise, the Family Planning Association is available in Belfast and Derry, which Ms Purvis describes as “the only organisation left in Northern Ireland providing non-judgmental and non-directive counselling on what a woman’s options are around her pregnancy”.

Green Party MLA Clare Bailey became a Marie Stopes escort in 2014 to offer help to women entering but mainly exiting the Belfast building.Most women did not request to be accompanied in but after being approached by protesters outside they would become highly distressed and then ask to be accompanied out.

Two escorts, one wearing a body camera, the other holding a walkie-talkie with an emergency button that was linked to the clinic, were always available.

One would stay with the woman and the other would act as a buffer between her and the protesters, making clear they didn’t want any leaflets, conversation or interaction with them.

Ms Bailey says this would be ignored, “every single time”.

“I had clients who were crying, who were terrified because protesters were using phones to record them, threatening to upload them to social media, threatening to report them to the police,” she said.

“I had one client who ran into oncoming traffic in the city centre to try to get away from them.

“In my time as a Marie Stopes escort I have been spat at, splashed with holy water, had my hair pulled, I’ve been threatened, abused, intimidated, harassed, all sorts of behaviour.”

With the closure of the Belfast clinic there is concern about the women who find themselves in a crisis pregnancy but who cannot, for a range of reasons, travel to England.

Instead, the National Health Service in the North, Ms Bailey said, should “step up” in Northern Ireland and offer women free, safe, legal abortions.

“I don’t believe it is anybody’s decision, apart from the pregnant woman,” she said.

“I don’t see how this is a matter of State control and I certainly don’t see why it needs to be backed up with the punitive threat of life imprisonment. This is a private decision.”

Marie Stopes UK managing director Richard Bentley paid tribute to the staff and volunteers for the support they provided to women accessing the clinic in difficult conditions over the last five years.

“They are incredible,” he said.

“I am just full of admiration for them and the other organisations that have supported them.”

He, too, rejected the claims made by anti-abortion activists that the closure of the Belfast office was a win for them: “It is actually a vindication of us being there and although it’s not ideal that people have to travel to England to get treatment the upshot is they can now get treatment free at the point of delivery. Have they won? Absolutely not.”

The solution now for women, he said, was a change to Northern Ireland’s abortion law.

On his visit to Belfast this week a taxi driver highlighted to him that the DUP wanted to have parity with the rest of the UK in terms of the Brexit talks but not on other matters.

“Our wish would be that women in Northern Ireland would actually have parity with the rest of the UK in terms of access to services. There has to be equality,” he said.

Abortion law in Northern Ireland is covered by the Offences Against the Person Act 1861 and the Criminal Justice Act (NI) 1945.

Access to abortion is permitted only if a woman’s life is at risk or if there is risk to her mental or physical health that is long term or permanent.

Life-limiting foetal abnormalities, rape and incest are not circumstances in which abortions can be performed legally.

Earlier this year, the UK supreme court in London upheld a ban on NHS-funded abortion care in England for women from Northern Ireland due to “respect” for decisions of the region’s Assembly, which is not currently in place.

Stella Creasy then proposed an amendment to the Queen’s Speech calling for Northern Irish women to have access to free abortions in England, where the 1967 Abortion Act allows for abortion up to 24 weeks. The new provision was subsequently introduced by the British government.